The Mercy is based on the true story of amateur sailor Donald Crowhurst (Colin Firth), whose determination to sail solo around the world was met with both praise and doubt, bringing much media attention to his ambitious endeavour.

On October 31st 1968, Crowhurst set off in a small sailboat he designed without experience or capable knowledge, yet put everything on the line, including his family home and ailing business – which he reluctantly kept secret from his wife Clare (Rachel Weisz). Knowing full well his vessel was not ready for the journey ahead, he nonetheless pursued his ambition of finishing the fastest in the ‘Sunday Times Golden Globe Race’, the first around-the-world solo yacht race.

It’s clear from the very beginning when Crowhurst sets out, the odds are stacked high against his favour. Thus begins his journey into the unpredictable and dangerous waters where he truly realises what he has gotten himself into. Only a month into the trip he realises his chances of finishing are slim, so in a life changing decision, he begins to lie to his family and the media about his coordinates and progresses through the race. Colin Firth is at his usual high standard as Crowhurst, and one could almost write his characters motivations as cowardly, but Firth gives him the spirit and desperation of a man who only wants the best for his family, by risking his life on a potentially deadly adventure. Rachel Weisz’ performance is solid, playing a supporting wife whilst trying to deal with the media scrutiny that is surrounding her husband’s voyage.

RELATED:  'The Suicide Squad' is Wild, Funny, and Bloody - One of DC’s Best

If The Mercy suffers from anything, it’s how it tends to pull away from the dramatic moments we, as the audience, endure with Crowhurst, to his family life at home. It’s not a major criticism by any means, but it feels as though if we had lingered with Crowhurst’s battle against the sea, the dramatic effect would have been stronger, potentially further elevating Colin Firth’s performance. One scene in particular where Crowhurst begins to hallucinate almost belongs in a horror film, and perhaps only scrapes the surface of what he actually went through.

Whilst The Mercy doesn’t quite lift to the heights of being an Oscar-contender considering the acting pedigree and story origins, it is nevertheless a compelling and very watchable tale of a desperate man in a desperate situation, trying to do what he thinks is best.

At age 55, Colin Firth is 20 years older than Donald Crowhurst was when he set off on the Golden Globe race. 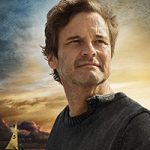