Set a couple of decades after she’d first visited the Banks children, Mary Poppins (Emily Blunt), by way of a magical flying kite, returns to the Banks home.

Jane (Emily Mortimer) and Michael Banks (Ben Whishaw) are all grown up when Mary comes back. Michael, a painter-come-widower-come-bank teller, has three children of his own, John (Nathanael Saleh), Anabel (Pixie Davies) and Georgie Banks (Joel Dawson). Following the loss of their mother and with the help of Mary’s friend, Jack (Lin-Manuel Miranda), Mary Poppins returns to the Banks’ family home to reawaken the magic that was misplaced in the light of the family’s loss.

I don’t even know where to start with this film – I could gush about it all day! The costuming was incredible and stayed true to the era, with each piece created specifically for the scene in which it was worn. The attention to detail of the set and the recreation of Cherry Tree Lane was impeccable, evident in everything from the lamps to the bikes to the cars to the buildings. Emily Blunt’s performance was exceptional and I am sure that she must have done Julie Andrews, the original Mary Poppins, very proud. Lin-Manuel Miranda was also wonderful, though one wouldn’t expect anything less from the creator of Hamilton and the co-writer of the Moana (2016) soundtrack. The casting of most everyone was flawless, although I was a little bored with Colin Firth’s role in the film as William Weatherall Wilkins. Being a simple Disney villain did nothing to demonstrate his acting abilities, a fact that was reflected somewhat regrettably throughout his performance.

And the songs, oh the songs! They were absolutely marvellous, sometimes filling me with joy, sometimes giving me chills and sometimes making me cry. The CGI was seamless, flowing smoothly from the reality and into the fantasy of the film without a hiccup. The storyline was easy to follow without being overly predictable, and as with all things Mary Poppins, I wasn’t always sure what would be coming next.

In bringing this film to life, Disney has proven, yet again, that they have an uncanny and extraordinary way with magic. Mary Poppins Returns is one of those wondrous Disney films that will be loved and re-watched for generations to come.

When Mary Poppins (1964) was being written, the lead role was offered to Julie Andrews by Walt Disney himself. Andrews told Disney that she was pregnant and couldn’t do the movie. Disney wanted Andrews so much that he postponed the production in order to accommodate Andrews’ pregnancy. When this movie was announced, the history repeated as Emily Blunt was also pregnant and the movie was postponed to accommodate her pregnancy. 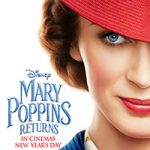