‘Manchester by the Sea’ – Review

There’s not too much I can say about Kenneth Lonergan’s latest film, Manchester by the Sea, without explaining the extreme weight of it. The film’s protagonist, Lee Chandler (Casey Affleck), bares a personal guilt so large, its force is felt so deeply that you start to wonder how powerfully trauma can be transferred from screen to seat.

The pain pictured is loud, the sudden death of Chandler’s older brother just the tip of the iceberg to the enormity of tragic events having occurred to the film’s protagonist. Suffering from a terminal heart condition, Chandler’s brother Joe (Kyle Chandler), is remembered through both lighthearted and heartbreaking flashbacks, his life preserved somewhere between the memories shared between his teenage son, Patrick (Lucas Hedges), and his younger brother, Lee. Presented initially to us as a moody Boston handyman, Chandler’s sombre attitude is humorous at first, the walls built around his character slowly rising and dropping throughout the film, just like a cradle-rocking ocean wave.

Having been brought back to his old hometown to care for his fatherless nephew, we slowly learn of Chandler’s past through town whispers and short interactions between neighbours. We work to piece together the confusing map which took Chandler from his happy family home he built with wife Randi (Michelle Williams), to an isolated, small home in Boston. We watch the overpowering force behind cause-and-effect played out through this absent middle-aged character, his entire world being turned upside down and apart, and not for the first time.

From the adventures on Joe’s boat at sea, to Chandler’s cramped studio in Boston, spaces have force throughout the film. Lonergan ensures the presence of an environment is so deeply linked to one’s memories and feelings that they drive a person’s life decisions, and change people’s goals. The consistent imagery of water throughout the film equally matches that of both bathing and baptism, a washing away of sins and guilt, and the markings to new beginnings.

If that’s not enough, the film hits a gut wrenching moment at it’s finale, when Chandler is confronted by ex-wife Randi and the full heartbreak of their past ensures their reunion is complicated and pulling at our heart-strings. Manchester by the Sea is an intense insight into grief and family dynamics, the film taking its time to be understood by audiences, much like the very process of losing a loved one itself.

First film distributed or co-distributed by a streaming service – in this case, Amazon – to get an Oscar nomination for Best Picture. 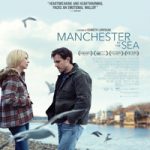