Loving Vincent is the first ever feature length film done entirely with oil paintings and is directed by Dorota Kobiela and Hugh Welchman.

Fittingly, the film is about the life and death of Vincent Van Gogh. The film is set several years after the mysterious death of the artist and we, as the audience unravel the mystery through the eyes of the postman’s son played by Douglas Booth, who is trying to deliver a letter to Vincent’s brother.

Loving Vincent is truly one of the most unique and beautiful films I have seen this year. The oil painted frames remind me of traditional animation where everything is coloured by hand, and studios would use inbetweeners and colourers to create each frame. The result of using this technique in 2017 is amazing; the brush strokes are so precise and the way the artists manipulate the colours to change the lighting in a scene is truly inspiring, reminding you of the collective effort it takes to make a film – especially animation.

Choosing to use an artform like oil painting also gives every frame unique movement that is truly beautiful. The way brush strokes are used to give movement to the characters and scenery is superbly creative, and it translates well on the big screen. I was anxious going into the film as I thought all of the movement in the frame would make me feel sick, similar to the effect that 3D can have on some people. However, to my surprise and delight my stomach was settled for the whole film and my jaw was almost permanently dropped.

Loving Vincent took over two years to make and required the help of two hundred artists from all over the world. It’s hard to imagine the hours that went into making each frame, but every artist who worked on this film made Van Gogh proud. I would like to see if this film inspires other filmmakers to push the envelope in terms of animation, as I do think this film is somewhat groundbreaking, and it may have a profound effect on animation over the next few years. My biggest problem with the film was the story. In a way, the film plays like a thriller minus the thrill. Since the film takes place years after Vincent’s death, it kind of plays like an episode of CSI, the result; a lot of exposition-heavy dialogue which causes the pace of the film to drop and drag at times. However, the performances and the animation make up for the lacklustre story, and the cinematography alone is enough to keep you entertained.

As mentioned earlier, all of the performances are solid and every actor and actress brings a level of realism to the film which gives it magical-like charm. Although there are no A-list stars on the call sheet, the film has great performances from Jerome Flynn, Chris O’Dowd, Saoirse Ronan and Eleanor Tomlinson.

Loving Vincent is one of the most visually stunning films I have ever seen; the animation is incredible and I think anyone can enjoy this film. Obviously, the film will resonate with fans of Vincent Van Gogh as they set a lot of scenes inside some of his most famous paintings like Starry Night, and his famous self-portrait. Fans of Van Gogh will also be pleased to see the subjects of his paintings come to life in this film through the magic of cinema.

I think this is what this film is all about, the magic of cinema. Today’s film market is saturated with so many films that lack originality and creativity, so it’s refreshing to see a film like this, which reminds you what film can be when you push the envelope. So if you want to be transported into an oil painting for a few hours and remember how beautiful and magical cinema can be, go see Loving Vincent.

Each of the film’s 65,000 frames is an oil painting on canvas, using the same technique as Van Gogh, created by a team of 125 painters. 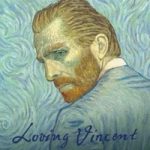