If one dared to give Steven Soderbergh just three West Virginian siblings, two robot arms, a bag of Gummy bears with gasoline and one plan to rob NASCAR for everything they’re worth, all before a child beauty pageant… Well, you just may have the next all-American classic on your hands.

Returning to the screen after his so-called “retirement” (four years of his life that saw him direct two TV shows and produce seven projects), nothing compares to having the master in charge of a new high-spirited, low-key blast of a heist film sure to make clever redneck-country proud.

Logan Lucky, to borrow Soderbergh’s own words, a complete inversion of an Ocean’s heist movie. This anti-glam crime caper seeing The Brothers Logan (Channing Tatum’s Jimmy and Adam Driver’s one-armed Clyde), along with their little sister Mellie Logan (Riley Keough), try their luck at screwing over the monolithic “big man” establishment to all their woes. The kind that sees you fired for a pre-existing condition you never asked for, and gives complete child custody to that twangy mouthed Katie Holmes ex-wife. The establishment that sends you half way across the world to serve in war, losing your limb and soul fragments in the completion of your duty, with all to show for it being a few welfare cheques now and then. The uptight rich that ogle you from across the carpark, undressing you with their invasive eyes, speaking mockery as they offer to maybe drive you around town once in a while. At what point do you look at the cards dealt, in a game oh so rigged against the little men and women at the bottom, and realise it’s common-sense to just flip that table?

It’s with this sense of robbed prosperity that — Bang! — as an audience member we’re in lock step with their justifications for the “go big or go home” robbery of the state: The Charlotte Motor Speedway during the biggest NASCAR race of the year. The very same Charlotte Motor Speedway our dear Jimmy Logan was working for, bulldozing underground and repairing sinkholes near the money transportation tubes (or, as Variety states, “a network of snake-like cylinders that wind their way underground and funnel the money into a steel bank vault”), before being let go so swiftly for “liability reasons”. Only a stupid person would abandon such an opportune moment to screw The System, come hell or high water.

RELATED:  'The Integrity of Joseph Chambers' Review - A Cautionary Tale But the offbeat fun and engagement doesn’t end there, as a moment like this needs strong adversaries. Joe Bang, to be exact. The talk of the film. What I’ve described as “Steve McQueen incarnate on cocaine”, giving Daniel Craig his most vicious, seductive and truly different performances to date, sporting a platinum-blond buzzcut so fitting of a cheeky redneck. The narrative more complex when, in addition to robbing the biggest race in history in smooth, crisp, cinematic glory (in a style as close to Scorsese’s Wolf of Wall Street (2013) as you can get), our dear Joe Bang is serving time in prison with as little as four months to go! Whatever is he to do other than, say break himself out of the slammer and then proceed to break back in (perhaps using a prison riot take-over) without a single person knowing.

The absurd is more naturally beautiful than it sounds, I can assure you.

Culminating in a crash of classes between, what Saul Alinsky described in Rules For Radicals, the haves and the have-nots, and the fundamental difference between them. The haves being, as the name implies, the ones who have everything. Obnoxious sports-car magnates, played by Seth MacFarlane and Sebastian Stan, being the example of what have-nots like Jimmy Logan fear: getting too greedy, pompous and up themselves, losing whatever justified their pursuit of prosperity in the first place. One particular scene, which I won’t spoil, involving music sure to bring that patriotic tear to any heart of the humble have-nots in your audience. Striking at the core of what Americans and people around the world (including myself) hear when we think “American”. You’ll know it when you hear it.

Logan Lucky is an energetic, technically crisp film, with a focus on the digital glory of the modern day, but most importantly, there’s a respect for where it’s representing the struggle of blue-collar men and women, serving as the great fantasy we just need in these times. 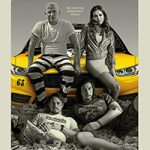