If you caught yourself wondering about a Winnie-the-Pooh film that came out not long before this one, you’d be right in your musings.

Goodbye Christopher Robin (2017), produced by Fox Searchlight Pictures and Pinewood Films, is based on the true story and fractured relationship of A.A. Milne and his son, Christopher Robin, the real-life boy for whom the world-renowned character is named.

Christopher Robin, however, is produced by Walt Disney Pictures and follows a much lighter and fiction-based tale whereby Christopher Robin is in his later years and, having forgotten all about the Hundred Acre Wood, struggles to adequately balance his work and home life. Whether a coincidence or not, it is in the very least uncanny that the two films, one fiction and one not, be released within a year of each other. A marketing ploy, perhaps? Who knows.

Christopher Robin (played by Ewan McGregor) is a working-class man kept busy by the demands of his work, often having to head into the office rather than spend time with his family. His wife, Evelyn (Hayley Atwell) and young daughter, Madeline (Bronte Carmichael), are left to take family holidays without him and are slowly losing their patience. Though Christopher grew up with Winnie-the-Pooh and spent his days with his friends in the Hundred Acre Wood, in his older age, he has forgotten all about them. Upon waiting faithfully over many years for Christopher to return, Winnie-the-Pooh finally ventures beyond the Hundred Acre Wood and into the commotion of London proper to search for his dear friend. Christopher Robin is the story of Christopher rediscovering himself through the friends he kept during his youth, friends who go on to help him better connect with his family in the present.

The live-action animation of Pooh and his friends is quite exceptional, with director Mark Forster delivering to the screen a believable series of interactions between man and bear. There is a humorous edge to the film that borders on slapstick comedy, made clear in the performances given by Christopher’s loyal co-workers, his persistent neighbour and his conniving boss, Giles Winslow (Mark Gatiss).

Christopher Robin reminds us of how our work can come to consume our lives and take away from the present, especially when we are in such eager pursuit of a better future. Winnie-the-Pooh, in his somewhat unintentional way, makes clear once more that as we grow up, we must not lose our playfulness nor our imagination, nor the wondrous innocence of our youth.

Irish actor Chris O’Dowd was initially announced as the voice of Tigger but he was replaced with his long time voice actor Jim Cummings alongside Pooh Bear the final film due to test audiences not finding O’Dowd’s take on Tigger with a British accent that very fitting for the character. 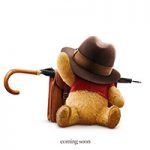