‘Little’ Movie Review – A Big Success for a Little Film

Little is a film with a big heart. Young girls are going to love this fun, energetic and well-produced comedy and the adults accompanying them to the cinema will definitely get a kick out of it as well.

Jordan Sanders (Regina Hall) is a successful businesswoman in the tech industry who has an incredibly mean streak she uses to cover up the wounds caused by an adolescence marred by bullying. She is a boss nobody deserves – constantly harassing her employees until they cry. Borrowing the 13 Going on 30 (2004) premise, Jordan is transformed into her younger self after she lashes out at a child selling doughnuts outside her office.

Jordan’s overworked and underappreciated personal assistant April (Issa Rae) steps up and acts as Young Jordan’s (Marsai Martin) aunt. Jordan is forced to enrol in the same school she was bullied at years ago and has to navigate the minefield that is middle school. A whole host of awkward situations and sticky complications arise, including Young Jordan hitting on her attractive school teacher (Justin Hartley), and the guy Jordan is casually dating (Luke James) mistaking the younger version of his girlfriend as her daughter and quickly adopting the role of doting stepfather.

RELATED:  'Cruella' Review - Disney Villainess is Worthy of Her Own Origin Film It’s a race against time to seek out the cure for Jordan’s condition while simultaneously preventing Jordan’s company from losing their biggest client. It’s a journey of discovery and self-realization for Jordan and a wake-up call for April who must find her voice and stand up for herself. Promoting an anti-bullying message and encouraging young people to believe in themselves, Little is a feel-good movie guaranteed to make you laugh.

Marsai Martin is captivating as Young Jordan. Martin does an excellent job of emulating her older counterpart, demonstrating a level of acting ability far above her 14 years. She depicts a snarky, judgmental, wealthy woman in the body of a teenager with such authenticity that it’s hard to believe she hasn’t experienced it firsthand. Martin actually pitched the idea for the film and was made executive producer (the youngest ever in Hollywood) – indicating a promising and varied career for the young actress and producer.

Although at times the story gets a little too ridiculous, suspending your disbelief before watching the film will ensure you enjoy it for what it is – an upbeat comedy with a talented cast.

Regina Hall previously worked with Issa Rae on The Hate U Give and Insecure, and with Marsai Martin on Black-ish. 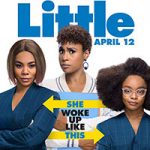