‘The Light Between Oceans’ – Review

When the events within a film are intensely complicated and heart-rendering, they will often be handled in one of two ways by filmmakers: with restraint, or with pure, ‘we need you to feel all the sad feels’ melodrama. For the most part, Derek Cianfrance’s adaptation of The Light Between Oceans falls under the latter category.

Emotionally numb WWI veteran Tom Sherbourne (Michael Fassbender) takes a job as a lightkeeper at Janus Rock, near Western Australia. He meets and marries Isabel Graysmark (Alicia Vikander), and a happy marriage complete with child seems to be on the cards. Isobel experiences two miscarriages, however. When the pair discover that a small boat has washed ashore holding a traumatised, yet living, baby girl, they decide to bring up the child as their own. Meanwhile, Tom discovers that the child’s birth mother is named Hannah Roennfeldt (Rachel Weisz), and as he witnesses her grieving for her lost family, he struggles with the guilt of raising a child who is missed, and presumed dead, by someone else.

The Light Between Oceans is intense. I know I’ve used that term already, but there’s no better way to describe it. The music is intense, the acting is intense, and every second scene is intense, even when it’s imbued in happiness. Intense is all well and good, but there’s a point where dizzying close-ups alerting audiences to the emotions of characters, combined with the consistent inclusion of sweeping, extravagant music, merely becomes overwrought and manipulative. We’re aware of how emotional this all is, we understand that Tom and Isabel and Hannah and their little girl have a tough road ahead of them, but filmmakers, please don’t shove it in our faces as though we have no idea how (or when) to react a particular way.

There were select moments that landed well; particularly Isobel’s second miscarriage and essentially any scene featuring Rachel Weisz. Both Weisz and Fassbender sink into their roles wonderfully. Vikander plays Isobel with equal amounts charm and anxious grief, but the well of emotion within her performance persistently threatens to spill over and drown audiences, adding to the soap-opera feel colouring the film.

Overall, The Light Between Oceans is an apt blueprint of what not to do if subtlety is your aim.

Michael Fassbender and Alicia Vikander revealed that Derek Cianfrance made them live together on set for six weeks. 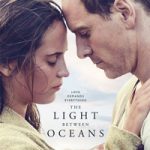