Isaac’s life has reached the lowest of lows; his acting career is going downhill; his acting students are having better luck at the big-time than him; his vision-impaired girlfriend of 10 years is about to leave him and his own family sees him as a massive disappointment. And even as he takes a chance on a new romance, Isaac struggles to define his place in a world that seemingly wants him to suffer.

Though advertised as a comedy-drama, Lemon is no laughing matter, and to call it a “drama” would be too generous. Lemon is one of the most depressing, disturbing features I have seen all year. Throughout the entire 85 minutes, I was uncomfortable and distressed as all-hell, baying for something more upbeat to watch. The character of Isaac is beyond unlikable, with his psychopathic and self-righteous personality making you want to throw your Coke at the screen, so that you don’t have to look at him for another second. Though lead actor Brett Gelman tries his best to bring sympathy, humanity and a quirkiness to the role, the character’s overbearing and disturbed nature is just too hard to watch.

A large majority of the cast suffer the same fate. Director Janicza Bravo has hired the most talented and most humble actors currently working in Hollywood, and turned them into the biggest word-that-rhymes-with-grass-trolls ever seen on the silver screen. Likable actors like Michael Cera, Judy Greer, Gillian Jacobs and Shiri Appleby are either reduced to egotistical bullies or pitiful victims who are never granted kindness. Like with the movie’s lead, they are unbearable to see on screen, and make you lose faith in the human race. The only good performance in the film (or at least, the performance that didn’t suck all positive thinking out of me) was Rhea Pearlman’s, as Isaac’s mother, who brings much needed pleasantness to such a dreary flick. Pearlman plays the stereotypical, yet lovable, Jewish parent, always wanting greater control of her son’s life, never afraid to make her opinions known, making cookery her soul duty in life, and getting unbelievably offended when her meals are not eaten by her loved ones. Out of all the performances in the Lemon, hers is definitely something to treasure.

RELATED:  'The Mitchells vs. the Machines' Review - Outstanding Timely Animation The story itself is rather inspired. The narrative is more or less unorthodox, preferring to follow an unpredictable and naturalistic structure as opposed to the standard “beginning, middle and end” or “the hero’s journey” type structures. The film is pretty much a day-in-the-life piece, following Isaac going about his day (over a course of a week or possibly a month) as he attends auditions for embarrassing commercials, tries to teach a class who more-or-less think they’re above him, and struggles to find happiness in his life. The concept is brilliant and a worthy subject to explore – but here it is poorly executed. Bravo along with Brett Gelman (who also serves as co-writer for this film), appear to have a bitterness towards the acting profession (and possibly the film industry in general), and use Lemon as their platform to flip the bird at it, thus creating something that is unfair and immature. It’s unnecessarily insulting towards those who hope to make it as an actor someday! I do admit that the profession and the industry is a monstrous beast to try and work for, and is certainly not immune to criticism; but there are better, civilized ways of spreading awareness of a serious issue than just slamming it in an arthouse flick! I appreciate their daring and their insight, but it didn’t have to be this way! This whole set-up could have been done better.

Miserable characters and mean spirited plots aside, there are some positives to the film that are worth noting. Bravo’s direction is unique and creative, and compliments her knowledge of the camera well. A majority of the film is done as a long shot, giving just about every scene a fly-on-the-wall feel to it, or an appropriate theatrical atmosphere to it (sort of making you feel like you’re watching a Chekhov play at your local playhouse – which makes sense since Anton Chekhov features heavily in the film). What Bravo lacks in story and character development, she makes up with her blocking. And Heather Christian’s musical score is flawlessly composed and beautiful to listen to, practically becoming a character in its own right. The score is bright, eccentric and friendly, almost reminiscent to the music of George Fenton in an Alan Bennett penned film. Christian certainly has a bright future as a writer of music; but sadly, her talents are wasted in this film.

Lemon is a miserable piece of work that will make you leave the cinema wishing that your memory came with a delete button. It’s a completely unfair trolling towards humanity and the arts! If you want to experience the film in a positive light, I suggest listening to its soundtrack or watching it on mute when it comes out on DVD or Netflix. But overall, do not come anywhere near this movie if you value positivity and the beauty of life. Run away before it ruins your day – and if you’re an emerging actor, run away before it puts you off your ambitions! Avoiding this film will be the most life changing decision you’ll ever make!

Writer/director Janicza Bravo and writer/actor Brett Gelman are married in real life. When the movie premiered, their families – that are portrayed quite dysfunctional in the movie – hadn’t seen the film yet.

Lemon is screening at the 2017 Melbourne International Film Festival, book your tickets to see it here! 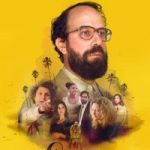