John and Ella Spencer sally forth on an impromptu geriatric road trip bound for ‘The Ernest Hemingway Home’ in Key West, Florida (between Miami and Cuba), in their RV named The Leisure Seeker.

Now, if you take the title at surface level, obviously a pun on ‘Pleasure Seeker’ which is, we might assume (from the myriad of seventies references in the film), a kinky homage to Suzi Quatro’s band. Old people sexual innuendo, like this, is something you can safely presuppose going into this movie. If that feeling adults get, groaning in agony as their grandparents discuss their sex life is something you can appreciate, you’ll probably love this. Whilst I probably wouldn’t recommend it for anyone under the age of 65, I can attest that mature-age couples were giggling and winking at each other in the wrinkled sea all around me, for the entire 113 minutes.

At the risk of sounding too cynical, The Leisure Seeker had many emotional resonances. It deals with some fairly heavy themes, albeit in a fairly light-hearted (at times mundane) manner.

Screen greats Helen Mirren and Donald Sutherland play John and Ella. We quickly learn that John suffers from dementia as Ella desperately battles to prompt his memory. She too is evidently a victim of intense pain, popping pills and shooting whiskey constantly. It is no great surprise to learn that she is also dying slowly from cancer. Italian director Paolo Virzì uses these illnesses as devices to slowly draw out and reveal the intricacies of the old couple’s relationship. John, an ex-teacher, spends most of the movie quoting Hemingway’s ‘The Old Man and the Sea’ to strangers and praising the prose of James Joyce. There is a certain realism to the character portrayals, which is no doubt appealing to people in that age bracket. The characters life is revealed through slideshow photographs which Ella uses to prompt John’s memory, adding a certain depth and realism to their persona.

As memories are dredged up, we experience the pain of jealousy as they reflect on past affairs and betrayals. The rollercoaster of a lifetime’s relationship is flashed by, as one might reflect on it towards the end of their life. All the while, politics lurk on the fringe of the film (which takes place during the American presidential campaign in August 2016). John ends up storming into a rally of Trump supporters, enjoying singing along with the ‘Make America Great Again’ slogans and chanting ‘Get the Muslims out!’. Ella chides him, saying that he has always voted democrat, which brought only a wry sneer from the audience, perhaps still too bitter over Trump’s win. The greater political message of The Leisure Seeker seems to be advocating the freedom of choice with issues like Euthanasia, and the freedom to travel, rather than being constricted to a nursing home.

There are some fun scenes which will appeal to a broader audience, like Ella whipping out a shotgun to fend off some carjackers, and hitching a ride with a biker to catch up to John in his RV. Ultimately, The Leisure Seeker is like spending a weekend with your grandparents. It’s cozy and warm, and the humour is safe but welcomed (over the bleak reality of the illnesses being depicted). It’s not going to be enjoyable for a mainstream audience, and you might want to rewatch Thanos defeating the universe in Avengers: Infinity War afterwards, just to get yourself a refreshing youthful pessimism, after this all too glossy, geriatric ditty.

There’s some nice cinematography in the movie which I found myself enjoying, in spite almost falling asleep in parts. Some of the shots of the ocean, mirrored with Hemingway quotes, provided an opportunity for thoughtful interludes and deep reflection on life. The final scene panning over the cemetery also provided a peaceful, but all too raw wake up call. As the credits panned, I couldn’t help feeling cheated. Perhaps I just came to expect too much, having great admiration for Donald Sutherland and Helen Mirren, but I clearly wasn’t the intended target audience for this movie.

Donald Sutherland and Helen Mirren appear on-screen together for the first time since the 1990 film Bethune: The Making of a Hero (1990). 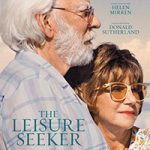