‘The Legend of Tarzan’ Review – A Modest Retelling of Classic Hero

Before Batman and Superman there was Tarzan, raised in the jungles of Africa by apes, this Victorian-era superhero receives the updated film treatment in The Legend of Tarzan and it doesn’t disappoint – to a degree anyway.

The character of Tarzan was created by Edgar Rice Burroughs and first appeared in the novel Tarzan of the Apes way back in 1912. Since then, the character has seen many a rendition in different media including books, radio, TV and film. The Legend of Tarzan is the latest iteration of the character’s story, adapted for a modern audience.

The film tells the story of Tarzan aka John Clayton aka Lord Greystoke (Alexander Skarsgard) who is basically living as a royal/celebrity in England with his wife Jane (Margot Robbie). He’s summoned back to Africa for sinister purposes by Leon Rom (Christoph Waltz), a representative of King Leopold II of Belgium, who’s been tasked to extract diamonds from Africa in order to settle the bankrupt King’s debt, at any cost. Tarzan, Jane and their third-wheel, George Washington Williams (Samuel L. Jackson) head to the jungle where Tarzan grew up as he’s forced to re-visit his past, save his wife and practically the entire African nation from slavery and death.

It’s a bit of a convoluted plot and unnecessarily so. It’s as if the filmmakers have tried to make the film seem more intelligent than it actually is, when all the audience really wants to see is Tarzan swinging on ropes and fighting bad guys. It does have all of that as well though, but in an overly ambitious style.

Alexander Skarsgard (True Blood, The East) is fine as Tarzan but his acting talents were not really needed for this role, even though he’s a great actor. For the role of Tarzan, it seemed as though any tall, ripped actor could’ve played the part. Thankfully Samuel L. Jackson (Pulp Fiction, Unbreakable) is reliable as always and brings a nice touch of comic relief in some parts of the film. Margot Robbie (Wolf of Wall Street, Focus) shines in her role as Jane and is the standout in this film. Her character was probably the only one in the film that had a bit of life in her. Unfortunately the villain character played by Christoph Waltz (Inglorious Basterds, Carnage) is as lifeless as ever, which is a huge disappointment for the actor considering he has endless amounts of talent.

David Yates directs the film and does a well enough job. His past credits include four Harry Potter films along with the upcoming Fantastic Beasts and Where To Find Them (also set in the Potter universe), so he definitely has the experience to handle blockbusters. It appears he got the most out of the script so any drawbacks the film has should probably not be credited back to him.

There’s also lots of computer generated imagery in this film. Practically all the animals in the film and even Tarzan himself in some of the action/swinging scenes are animated and it works for the most part, but there are moments where it also looks a bit ridiculous and may pull some people out of the movie.

The Legend of Tarzan is relatively entertaining overall but probably won’t be very memorable in the long run. As a popcorn film it’s fine, and whether it’s the Victorian-era setting, the exquisite landscapes, Margot Robbie’s doe-eyed stare into the camera, Alexander Skarsgard’s ripped physique or the epic action you’re into, The Legend of Tarzan will still have something for everyone.

Alexander Skarsgård joked that he would like Tarzan to be drastically different in the sequel because of the heavy workout and diet demands on him. He said, “We have an outline already in which Tarzan gains weight. Tarzan remains hairy and does not have eight pack abs. It has not action and Tarzan eats cake, lots of cake. I wrote it.” 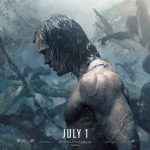 not bad, but not very memorable aside from maybe one or two good scenes