Kung Fu Panda 3, the third instalment of the Kung Fu Panda film series delivers most of what we love about the series, but is lacking when it comes to offering us something new and fresh for the franchise.

In Kung Fu Panda 3, Po (Jack Black) is over the moon to find out that his father Li (Bryan Cranston) has rocked up to town seeking him out. At the same time an ancient evil warrior, Kai (J.K. Simmons), has returned from the spirit realm on a quest to steal the chi’s of all the greatest warriors in the living realm, including those of Po and his friends. Po must now go on a journey of self-discovery before he can take on the evil Kai.

The Kung Fu Panda films all have a similar formula – the clumsy hero is unsure of himself, under his master’s guidance, the hero must overcome an almost impossible obstacle, the hero struggles with an internal battle but with a little help from some friends, the hero saves the day.

Sure it’s a very common formula used amongst a lot of films, but it does get a bit tiresome after having seen it in the first two instalments of this series. Luckily it is still as charming as ever and quite humorous in parts. The characters are all well written and the voice acting is great. What stands out the most in this film is the animation though. It’s top-notch stuff and the visuals really do look amazing, for instance (and this is always talked about), the hairs on the panda bears and something so simple as the blades of grass on the screen look perfect. This element of realism ads to the fantastic animation effects of the characters and backgrounds, so credit to the animators and art director on this one.

Kung Fu Panda 3 won’t win any awards for being the most original animated film to come out in recent times, but it’s a well-made addition to the franchise and kids will definitely get a kick out of it.

The humour and animation save this film, but there’s not much going for it plot-wise.

In order to get a feel for how pandas live, the filmmakers went directly to China’s biggest panda preserve in Chengdu. While there, the filmmakers noted that pandas rolled to get places and incorporated that into the film. 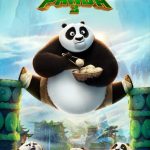