‘Kubo and the Two Strings’ – Review

In Kubo and the Two Strings, a young boy embarks on a dangerous journey to defeat a mysterious enemy.

If, like me, you need a break from the abrasive and cynical blockbusters that have been inundating cinemas for the last few months, by all means, stop what you are doing and see this film.

Travis Knight’s directorial debut is magical, dark, and bold. It is whimsical, and earnest, and every frame is beautiful. We are so spoilt with modern animation and stop-motion, that to call something ‘beautiful’ now sounds insincere. It’s a big word that has been overused. We read it in passing and it feels meaningless. But I assure you, every little slice of origami inspired stop-motion in Kubo and the Two Strings is meaningful, full of thought, and beautiful. And the stunning visuals are only enhanced by the story, in which Kubo tells tales using origami. The visuals and the story feed into one another, over and over; an endless loop of thematic consistency.

The themes in Kubo and the Two Strings aren’t necessarily unconventional for a ‘children’s film’, but the depth with which they are explored is certainly unfamiliar. The film embraces some of the darkest parts of life. Our hero faces loss, and there is no magic fix for his heartache. Where other films would have a final Hail Mary or ham-fisted deus ex-machina, Kubo instead embraces the consequences and the finality of life’s most difficult trials. Aesthetic beauty aside, this is where Kubo and the Two Strings rises above the rest. It acknowledges that there is more to life than the black and white ideas of good and evil we often find in storytelling. We see the shades of grey and are enlightened to the prospect of understanding and forgiveness. The film has optimism and darkness in equal measure. But rather than witness a struggle between the two forces, we watch them exist and endure as one. The only criticism I can lay at the feet of Kubo and the Two Strings, is a criticism I’m honestly a little bit sick of making. The five primary Japanese characters are voiced by white actors. While this isn’t uncommon in animation, and isn’t as egregious as the trend of white actors playing people of colour in live-action films (a recent, notable example is Christian Bale somehow playing an Egyptian in ‘Exodus: Gods and Kings’), it is quite vexing to see Japanese culture and imagery depicted so captivatingly, while seeing very little representation for actors of Japanese heritage.

Whitewashing aside, the voice performances are excellent, as is everything else. It is clear that every part of this film was created with care and love, and audiences who stay during the credits will be treated to a small example of that in a time-lapse clip of the work that goes into creating a stop-motion film.

All in all, Kubo and the Two Strings is unique, and mythical. It is optimistic and poignant and everything in-between.

On average, 4.3 seconds of film was created every week. The film took roughly 5 years to make. 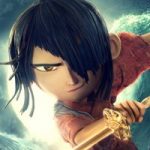