‘The Killing of a Sacred Deer’ – Review

One thing to keep in mind before viewing The Killing of a Sacred Deer is that if you have seen director Yorgos Lanthimos’ previous work, which includes The Lobster (2015) and Dogtooth (2009), then you might almost be prepared for what’s in store.

The Killing of a Sacred Deer is a darkly funny, yet emotionally draining slow-burn with exceptional acting, that will no doubt sucker punch you in the stomach – and not apologise for it.

Coming off critical acclaim from his previous work The Lobster (which also starred Colin Farrell), Lanthimos gives us more of a horror movie this time around. With so many tension-building moments, you wonder how it’s going to keep topping itself until the moment arrives at the white-knuckle finale. The less you know the better.

We are introduced to Stephen Murphy (Colin Farrell), a successful surgeon who has taken the young aspiring surgeon, Martin (Barry Keoghan), under his wing. At first glance, upon inviting Martin into his home and introducing him to his wife Anna (Nicole Kidman) and children Kim (Raffey Cassidy) and Bob (Sunny Suljic), Martin appears as a sweet and polite teenager, with Kim becoming instantly smitten with him. Only then do the tables turn as Martin is revealed to have a hidden agenda, and is not who he appears to be.

If that sounds a little too formulaic, then this is when the film will take you on a journey that will easily put that thought to rest. It’s hard to say what happens next without giving away what’s in store for everyone involved, because the less you know the better, and the rabbit hole only goes deeper until ‘that’ finale. There is no doubt that everyone’s lives are at stake, and unlike any horror movie we’ve seen in a while, this film has a cutting psychological edge.

The performances alone are worth the price of admission. They are played out almost robotically, yet there is so much emotion behind them. Nicole Kidman excels as a focused, hard-as-nails wife and mother, as opposed to an equally brilliant Colin Farrell playing it more sympathetically and subtle. The real standout however is Barry Keoghan, who gives Martin a childlike vulnerability, yet with a no-holds-barred psychotic edge. It really is a brave and unhinged performance that deserves high praise.

It’s with fair warning that this will not be a film for everyone. Its humour is black as night, with sudden outbursts of violent horror, only adding to the building dread each scene delivers until the final frame.

Colin Farrell admittedly felt nauseous after reading the script for the film.

The Killing of a Sacred Deer screened at the 2017 Melbourne International Film Festival – check out our reviews from MIFF here. 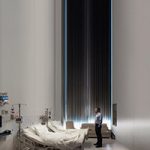