Just Friends parodies the dreaded “friend-zone” and features a humorous performance from Ryan Reynolds and its supporting cast.

Chris Brander (Ryan Reynolds) is a hot-shot L.A. music executive. He has the money, the looks and the charm to lure many women. Chris’s latest project is to turn ex-girlfriend and crazy socialite Samantha James (Anna Faris) into the newest pop sensation. Samantha’s lack of talent and intelligence sees the two end up in Chris’s old town of New Jersey after an unexpected plane mishap en route to Paris.

Here Chris reunites with old high-school friends and former best friend Jamie Palamino (Amy Smart). Chris and Amy were inseparable growing up together but it all came crashing down after Chris declared his love for Amy at their high school graduation ten years ago. After hearing the “just friends” speech Chris left and had not returned since. It is after seeing Amy that Chris decides to postpone Paris and woo Amy again, all the while entrusting Samantha with his little brother Mike (Christopher Marquette).

From here the laughs ensue as Chris tries in many ways to win Amy over, but begins to realise that it is harder than it was ten years ago. One disaster after another follows Chris after Dusty Dinkleman (Chris Klein), another “just friends” guy of Amy’s appears in town and aims for the same prize. With Dusty and Samantha both spoiling Chris’s attempts to win Amy over, Chris must face several tough decisions about his professional future with Samantha and his romantic future with Amy.

Just Friends is a laugh-a-minute romantic comedy film that covers the sensitive nature of the hidden crush and the inevitable “friend zone” when two people do not share a mutual feeling for each other. Reynolds gives an excellent performance as the once over-weight, now re-invented lady killer, who goes back and finds his true self after seeing his old high-school love. Anna Faris also provides many laughs as the psychotic no-talent pop singer who often steals the scene when on-screen. A good script with funny performances from the film’s stars and ensemble cast, Just Friends is a great rom-com, definitely worth a watch this summer at the pictures. 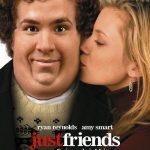 I loved it also

Did this fly under the radar? I must have mussed it