‘Jumanji: Welcome to the Jungle’ – Review

In Jumanji: Welcome to the Jungle, four teenagers in detention discover a video game console and are pulled into the game’s jungle setting, where they inhabit the adult bodies of the avatars they chose. Together they must complete a quest, and finish the game so that they can go home.

While the original Jumanji (1995) is far from a perfect film, it has remained beloved by many in the film community, and the passing of Robin Williams has only strengthened the nostalgia surrounding the property. Jumanji is actually a great contender for a remake; it’s a high-concept film that didn’t exactly succeed in executing its story. In essence, the bones of the film were good, but the body was weak. That’s what makes it fertile ground for a new take. And for the most part, Jumanji: Welcome to the Jungle really succeeds. It takes the base concept – the bones – and puts it in a modern body, with a vastly different set-up and vibe.

The Jumanji board game does feature in the film, however, as we open in the 90’s rather than the 60’s, the somewhat sentient board game transforms itself into a console cartridge. While this is a bit ridiculous, if you can suspend your disbelief to accommodate this one element, the rest of the film will fall into place. It’s because of these changes that Welcome to the Jungle manages to pay homage to the original, without stepping on its toes.

One of the most entertaining aspects of Welcome to the Jungle is the characterisation of the leads. Although onscreen we see Dwayne Johnson, Kevin Hart, Jack Black, and Karen Gillan, actors who we expect a certain energy from, the fact that they are all playing teenagers in different bodies adds a bit of spice to what may have otherwise been predictable performances. For instance, Jack Black is playing Bethany; a blonde, 16 year old cheerleader type, while Dwayne Johnson plays a neurotic and ever-anxious nerd named Spencer. This allows for a lot of character driven comedy, as well as situational comedy that’s enhanced by the characterisation. The film frequently benefits from the function of its main plot device (that all the characters are in a video game). This means the action can be absurd and over the top with no further explanation. It also means that most of the fighting can be bloodless and free of consequences (as it usually is in a PG action film), while still making logical sense. These are things we would usually consider plot holes, but the video game device permits them all, allowing us to enjoy the farcical elements guilt-free.

It also allows us to enjoy Jack Black, who is a clear highlight. This is mostly because he is playing the most unconventional character by far. He also gets some of the more entertaining moments, including the scene in which our characters realise that, much like in a video game, they all have three lives.

Unfortunately, the film isn’t without its flaws. The villain, Van Pelt, is a bit weak. Not as a result of the performance, in fact, quite the opposite. Bobby Cannavale is brooding and nefarious, and his character affectations certainly position him as a very dark force. But, he just doesn’t have too much to do, and there could definitely be more of him. In all fairness, this is exactly what one would expect from the villain of a 90’s video game, but it’s just a bit unsatisfying in a film. Aside from this, there are very few things that get in the way of the enjoyability of Jumanji: Welcome to the Jungle.

Ultimately, the movie manages to be entertaining and surprising. It doesn’t always go the way one would expect, and its divergence from the original is its greatest strength.

The idea of the main characters getting sucked into the game itself rather than staying in the real world is similar to the Jumanji animated series, which itself was an altered retelling of the first Jumanji movie. 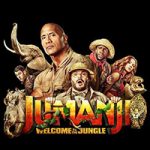