A film that has garnered as much applause as it has awkward collar tugs, 20th Century Fox’s ‘anti-hate’ dark-comedy Jojo Rabbit enters the Awards season as 2019s most controversial contender for the gold statue.

Having warmed the hearts of global audiences with his array of bittersweet films, New Zealand’s golden child Taika Waititi can do no wrong as far as Hollywood is concerned. Facing what is arguably his biggest challenge as a filmmaker, Waititi verges on offensive with Jojo Rabbit; a coming-of-age historical comedy set against the final days of the Second World War.

Adapted from Christine Leunens’ 2008 book Caging Skies, a ten-year-old Nazi-era German nationalist named Jojo (Roman Griffin Davis delivering an assured performance well beyond his years) discovers that his mother Rosie (Scarlett Johansson) is sheltering a young Jewish girl named Elsa (Thomasin McKenzie). What begins as a moral conflict for Jojo, deciding on whether to be a good Nazi or good human being, turns into the threatening realization that the discovery of Elsa by the Nazi regime would result in the persecution of himself, his mother, and many innocent lives around him.

A Nazi soldier in training, Jojo’s sense of stoic nationalism extends up until the point of causing others harm. Jojo navigates the complexities of his life by interacting with a father-figure-inspired imagination of Hitler (portrayed with childlike sensibilities by Waititi). Verging on the brink of young adulthood, Jojo’s youthful exuberance and conflicted perceptions on challenging what is right and wrong offers a progressive foot forward into the future.

Jojo Rabbit uses the experience of children in war to highlight the derangement of the time. Waititi entrusts every fiber of the film to denounce the morality of Nazi-era Germany, with even the characterization of accents – flickering back and forth between German and British – embodying the sheer lunacy of WWII-era politics. The extent of the film’s jingoism is captured in the well-rounded comedic performances of Rebel Wilson and Sam Rockwell. The duo, who portray two precarious Nazi officials, host what is quite possibly the most disturbing vision of Summer Camp displayed on screen. As terrifying as the battlefields are, so too is the practice of unchecked radicalism. Waititi has proven himself a master of crafting loveable characters who navigate the toughest of upbringings. Jojo Rabbit is yet another impressive example of Waititi’s signature sense of characterization. While the Boy (2010) director expresses the familiar hallmarks of his previous films, a coming-of-age tale featuring a young male lead with an offbeat sense of humor who harbors feelings of abandonment, the experience of watching Jojo Rabbit is just as euphoric. This is courtesy of a well put together cast who are tuned in to the same endearing and comedically daggy frequency of Waititi. Credit ought to be paid to the young cast of actors – Davis, McKenzie and perpetual hugger Archie Yates – who deliver excellent performances that set the diverse tone of the film.

Waititi has declared himself a feminist icon with his respectful construction of characters. An unsurprising achievement considering Waititi’s work on Hunt for the Wilderpeople (2016). Johansson and McKenzie, who are subject to the cruelest experiences throughout the film, find the strength within themselves to deliver composed yet powerful performances. The passion they exude based on their characters’ determination to dance again, the ultimate expression of freedom during a period of war, provides the film with a level of tenderness that is quintessential Waititi. With Waititi having demonstrated a record of culturally respectful filmmaking, leveraging his own Maori background as an influence for the films Boy and Hunt for the Wilderpeople, it is, however, surprising to see the director depict such a flagrant and facile imagination of Hitler. By no means does Waititi humanize Hitler. For every second of buffoonery provided, the audience is then treated to an unhinged dictator (another trademark of Waititi’s being his characters idolization of aspirational figures of the time – Michael Jackson and Tupac). The needless inclusion of imaginary Hitler, the physical depiction of propaganda and stand-in for Jojo’s ideal father-figure, repeats an already beaten message regarding the dangers of political extremism.

It is unclear what point Waititi tries to make with his humiliating portrayal of one of the world’s most vile figures. If it is a message of anti-hate, Jojo Rabbit dilutes this underneath the weight of the film’s crowd-pleasing nature. Troubling imaginary Hitler aside, Waititi proves as heartwarming as he is heart-shattering. He is a director in complete control of mood, balancing the harshness of life with the optimistic, and carries through in Jojo Rabbit a sense of jubilance so infectious that the viewer cannot help but be smitten.

Some may question why Waititi is exempt from revisionist backlash the same way Quentin Tarantino hadn’t been. Where Tarantino has found virtue and entertainment screaming racial slurs, Waititi has earned his credentials to sit at the table and discuss matters of war and mistreatment. Waititi will receive forgiveness by audiences for his ability to charm. He compensates for an excessive amount of characters, a heavy-handed desire to be provocative, and restraint in depicting the horrors of the time with a very personal and affectionate film that celebrates unbridled love to all. Dance away.

When Taika Waititi, who is Maori/Jewish, was asked about why he chose to play the role of Adolf Hitler, he said “The answer’s simple, what better ‘fuck you’ to the guy?” 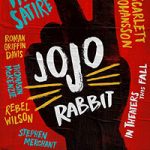