By Shalee Rae in Features 2 years ago

For beginner movie buffs out there, it is likely that they have stumbled upon a list of classic films that they “must” add to their repertoire.

Others may suggest that film enthusiasts should dive into a director’s whole collection of work such as everything by Quentin Tarantino.

The truth is, while it is nice to watch recommended films, each person’s experience and tastes are unique and so it is usually best just to go with one’s instinct and to watch films they think they may enjoy or will learn from.

For many movie lovers, their passion for film was ignited by early childhood experiences, which is why so many people have a certain soft spot for Disney.

As for me, I grew up on John Wayne films.

Being indoctrinated in the world of cowboys, sheriffs, and Indian chiefs meant that I developed a certain taste for what I think makes a great film (and for what doesn’t).

Furthermore, I believe that many film buffs out there will get a great education by diving into some of Wayne’s works and will likely have a good time too.

But with over 70 movies to choose from, I have made things a little easier by shortlisting some options that are not only my favourites but that are also classics that others may enjoy.

McLintock! is an easy place to start for those who are wanting to dive into the world that is John Wayne.

This romantic/adventure comedy sees Wayne team up with actress Maureen O’Hara (the pair appeared in many films together) to provide us with a look at what married life could be like for a couple living on a ranch.

The two separate for a while as O’Hara’s character suspects adultery and so takes off to the city.

When she returns to the ranch, what we see is a whole lot of fun and a complete riot.

A little fun fact, the movie is loosely based on ‘The Taming of the Shrew‘.

Rio Bravo is commonly quoted to be one of director Quentin Tarantino’s favourite movies and for good reason.

Starring John Wayne and Dean Martin, this comedy adventure sees two sheriffs trying to protect a prisoner from getting busted out by his brother.

This film has a great ensemble who work together to ensure that they do everything in their power to not only protect their prisoner but to also keep themselves alive.

For those who love a good shoot-out scene (and a certain side character yelling out great lines like “how do ya like them apples”), this is the movie for them.

In this comedy-action film, we get to see Wayne co-star with Kirk Douglas and what transpires is nothing less than a good time.

Douglas’s character Lomax is a money hungry, pretty boy who reluctantly teams up with Taw (Wayne) to rob a wagon full of gold.

This flick has one of the best bar fight scenes in history and even gives us a little glimpse at a young Bruce Dern.

All in all, this movie will keep viewers on their toes and will leave them wanting more of this dynamic duo.

This classic piece of cinema gives us one of the grittiest roles that John Wayne has ever played.

We see his character Ethan Edwards return home after 8-years away, some of which he fought in the Civil War.

We are clearly shown that Ethan has a strong distaste for American Indians which doesn’t soften any when his brother’s home is pillaged and his two nieces are taken.

What follows is the long search for his nieces and perhaps even the softening of his hatred for Indians.

Some viewers believe that Ethan’s character was in love with his brother’s wife and that one of his nieces may even be his daughter. 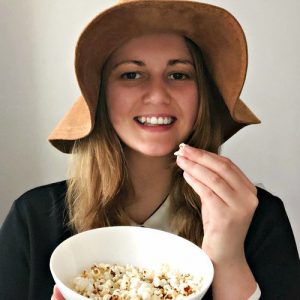 Shalee Rae
Shalee Rae is a Melbourne blogger who has a passion for food, wellness, and all things film.

Deserted Island Movie Collection: Since I would have a lot of time to kill, I would bring all of John Ford’s movies (there are over 140 after all).