Jigsaw marks the 8th film in the Saw series, and whilst it presents itself as a semi-reboot of the franchise, it really is a case of – seen one Saw film, seen them all.

However, Australian filmmakers The Spierig Brothers manage to inject some life (but mostly death) into a well-worn concept that will no doubt satisfy hardcore horror fans of the ilk.

It’s been seven years since the last Saw film hit cinemas, so the question of whether another one was deemed necessary is debatable at best. The film opens with five people (one unconscious) trapped inside a room faced with a wall of circular saw blades, and once again Jigsaw’s voice booms over a loudspeaker, giving them subtle hints on how they can free themselves from certain death, and also by confessing to sins of their past. From then on it’s a case of who will die in the most gruesome way possible as they are navigated through a series of brutal torture devices, like rats in a maze.

So it goes without saying that the formula that made the series so popular doesn’t change a whole lot, with the gimmick of who can die in the worst way possible still fully intact throughout the film. If it weren’t for the subtle hint of playfulness behind these antics, all would be lost in utter stupidity. The secondary plot that gives us a rest from all the bloodshed, sees a small group of police and medical examiners trying to solve the mystery of how these murders are still being committed by someone who has been dead for ten years. Oddly, it doesn’t slow the pacing of the film, which does a good job of keeping things moving along quickly enough for the audience to really consider how many plot holes there actually are. The acting alone is hammy at best, but let’s face it, this series isn’t out to win any awards. It knows what its purpose and target audience is and some gratitude must be given there.

The Spierig Brothers actually set up some wince inducing scenes that fans will enjoy, the highlight being two characters stuck in a silo whilst being pummelled with more than a truckload of grain. This is clearly a director-for-hire job but they still manage to wring out as much tension and gore as possible, even though we’ve seen it so many times before. Hopefully they will continue to move onto better things as their debut film Undead (2003) is definitely worth a look, as are their previous efforts Daybreakers (2009) and Predestination (2014).

So when all is said and done, there really isn’t any new ground to cover here. The audience should know what to expect by now, and whether you can get your head around the final plot twist is merely a matter of just accepting it, or feeling like you’ve been slightly cheated. Either way, Jigsaw could have been a whole lot worse.

A soft reference to Jigsaw (2017) was shown in the film Insidious (2010). It was a drawing of the clown puppet on a chalkboard with the number “8” beneath it. 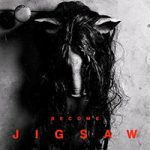