It’s been nine years since the last Bourne film (excluding the underrated Jeremy Renner version – The Bourne Legacy) and the question is, did we really need another one after the successful trilogy?

It’s a relief to say that the new Bourne doesn’t feel like a cash in, rather as more of a continuation of the previous films. The good old shaky cam returns with a vengeance, which does work in small doses but when we have a ten minute action sequence involving explosions, running and gunfire, it gets too blurry and confusing at times for its own good.

But let’s face it, we really just want to see Bourne kick ass and this latest instalment delivers the goods. Damon remains in fine form returning as a more weathered and weary Jason Bourne who is now spending his time in underground fighting rings until a familiar face shows up, bringing him back into the world he’s been hiding from. Nicky Parsons (Julia Stiles) emerges with information about Bourne’s father and his involvement with the agency program called Treadstone. This leads them to discover that another similar program is being organised called IronFist, led by CIA honchos Heather Lee (recent Oscar winner Alicia Vikander) and Robert Dewey (Tommy Lee Jones, doing his signature grumpy old man performance to a tea). Once they find out what Parsons knows and that Bourne is involved – queue the shaky cam action.

Also tailing them is The Asset (assassin in Bourne language) with a personal agenda, played by an always reliable Vincent Cassell. Story wise, that’s all you need to know as we jump across from Greece, to London, then Las Vegas, one action sequence at a time. Returning director Paul Greengrass keeps the pace up nicely, giving the franchise its signature look.

The return of Jason Bourne feels like catching up with an old friend you haven’t seen in a while. Nothing might have changed but you still enjoy each other’s company.

First Bourne film to not have the franchise’s trademark title format of The Bourne ____. This film is instead called Jason Bourne rather than its originally rumored title The Bourne Betrayal. 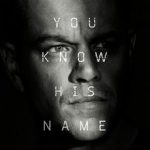