The immense hype IT has built has been of blockbuster proportions, with the highest number of views ever recorded for a movie trailer on YouTube. So the big question is, does it live up to it? Yes and no, is the only answer that comes to mind.

Whist it does have its fair share of strong and effective moments, the whole affair seems a little rushed despite the 135 minute runtime. To be fair, Stephen King’s epic novel the film is based on was close to 1,200 pages in length, and to include every aspect of it on film is a near-impossible task. Also, with a sequel already announced, there may be a chance to fill in some of the gaps and complete what feels like a slightly unfinished puzzle.

However, there is still a solid horror film on show here, and it’s good to see that director Andy Muschietti focuses on the seven young leads, throwing them into a living nightmare without a hint of holding back. The film wastes no time in coming out strong with the leader of the group Bill (Jaeden Lieberher), potentially sending his younger brother Georgie to his death, thus creating a chain of events that will include all of his friends, Richie (Finn Wolfhard), Eddie (Jack Dylan Grazer), Ben (Jeremy Ray Taylor), Stan (Wyatt Olaf), Mike (Chosen Jacobs) and love interest Beverly (Sophia Lillis) – who call themselves the ‘losers club’. One by one they all come to face their deepest, darkest fears, at the hands of Pennywise (an impressively creepy Bill Skarsgard), a monster that disguises itself as a clown (amongst its many forms of each person’s worst fears) and lures children to their deaths. The chemistry within the group is well played out and gives the film a certain Stand By Me (1986) vibe, which transitions well when the horror starts. The scares come quite often (and refreshingly randomly), with Pennywise lurking at every turn. A scene that includes Bill facing Pennywise in his basement particularly stands out. A second story-arc which involves a group of bullies led by Henry Bowers (Nicolas Hamilton), who torment the ‘losers club’ unfortunately seems tacked on and needed to be fleshed out more, especially for fans of the book.  All the young leads give fine performances, but the main attraction here is Bill Skarsgard and his interpretation of the signature villain, Pennywise. He gives the character a childlike demeanour, as well as a sinister and cruel underlining that plays so well, you just want more of it.

Many will want to compare the film to the popular, yet arguably dated 1990 miniseries of the same name, especially putting Tim Curry’s version of Pennywise up against Bill Skarsgard’s. The victor will essentially be a matter of opinion, but as far as a more faithful adaptation of the book goes, 2017’s IT comes out on top.

So if you want to believe all the hype, it might pay to lower your expectations and go in with an open mind. That being said, it is without a doubt, a strong horror movie with scenes involving violence towards children that are as effective as they are unsettling, yet it’s a bold move which makes the film stand above the standard horror-movie fare that has been released in the past few years.

Although Bill Skarsgård was on set for the majority of production, he didn’t actually begin filming his scenes until more than half of shooting was complete. The time before he actually started filming was spent working with Andrés Muschietti and the producers in order to perfect his mannerisms as Pennywise, as Skarsgård stated that he felt an immense amount of pressure to play the role perfectly due to Tim Curry’s well-regarded performance in It (1990). 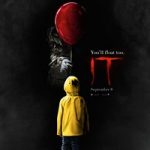 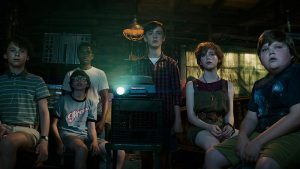 Gallery image with caption: Stephen King’s ‘IT’ Sequel Movie has Already been Green-Lit 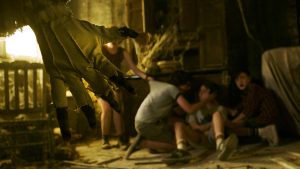 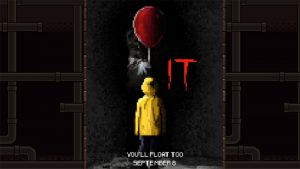