Iron Maiden is a heavy metal band formed in England in the mid-seventies. The band have been one of the most successful and influential bands on the heavy metal scene over the years and are still going strong thirty-plus years later (the band has sold over seventy million albums with little to no radio airplay over their career).

Last year the band embarked on their largest tour yet labeled the ‘Somewhere Back In Time’ tour. Equipped with their own customized plane called ‘Ed Force One’ which contained their entire stage show and tour equipment, full touring crew and piloted by Bruce Dickinson (Maiden’s lead singer), the band flew across the globe in forty-five days, playing in thirteen countries to over half a million fans in only the first leg of their tour.

Filmmakers Sam Dunn and Scot McFadyen (Metal: A Headbanger’s Journey and Global Metal) take us behind the scenes (the only time the band has allowed full camera access back stage) of what is involved in the touring process. They follow the band around from country to country and gain their thoughts as they play one sold out show after another. Maiden have always been a band about the music and we really get to see their devotion to the art as well as their fans in this film, but also get to see the different characteristics of the band’s members as the cameras follow them around on their off-days during their leisure time.

Another interesting aspect this film captures is the craziness of Maiden fans and the lengths they would go to just to make it to a show (wait till the band visit South America). The film truly captures the fan’s passions and emotion for the band and you can see just how inspirational and influential the band has been in so many people’s lives around the world.

The film looks and sounds fantastic. It is shot entirely in high definition, mixed with 5.1 surround sound. The concert footage is some of the best out there and the audio quality and frequency of songs will keep your feet tapping over the entire length of the film.

Flight 666 is a must-watch film for any metal and general music lover interested in seeing what is involved in the strenuous process of touring. It is great to hear this humble band’s thoughts in between shows as they fly around the world in such a short period of time and we get to see their reactions to the stresses of touring along with the crazy fanfare that goes with it. This isn’t the most in-depth documentary film ever made, but it contains superb audio and visuals and it is just amazing to see how massive Iron Maiden are after thirty years in the industry and they appear to not be slowing, making new and younger fans as the years progress.

The Boeing 757 plane that took the band around the world, flown by their singer Bruce Dickinson, is nicknamed “Ed Force One”. 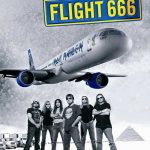