With Earth diminishing and slowly suffocating the dying human population, a group of astronauts are tasked with entering through a wormhole, in hopes of finding a habitable planet for the people stranded back home.

The team is led by Cooper, a former pilot and engineer — who owns a farm with his father-in-law and two kids. He’s played by Matthew McConaughey in his most stunning, versatile role to date, exhibiting an emotional range that resonates with the audience. Anne Hathaway, Jessica Chastain, Casey Affleck, Topher Grace, David Gyasi, Wes Bentley, John Lithgow and Michael Caine round off the rest of the cast, not to mention a surprise cameo that was expertly hidden from the marketing campaign leading up to its release in 2014.

This is Christopher Nolan’s ninth feature-length film and his mainstream neorealism and gorgeous detail are well at work here. Interstellar walks and talks like a big-budget blockbuster that implements a deeper meaning in its subtext and execution; the kind of style that’s etched The Dark Knight and Inception director’s name in stone. The film is an unforgettable metaphysical experience that’s complimented by wonderful performances and tackles themes about love, science, technology, the unknown… But most of all — faith.

The cinematography, visuals, sound and production design are some of the best ever showcased in a sci-fi, perfectly moulding the feel of real space travel and pragmatic, grounded depictions of a not-too-distant future plagued by environmental changes. The team of explorers travel through the wormhole to another solar system, sending messages to their loved ones at every chance they get. Due to the time distortion, each day spent on a particular planet could see seven years pass by on Earth, making their mission adopt tight time restraints. There’s a Plan B to their mission: if finding a habitable planet takes up too much time, then the human species is bound to die on Earth, so the team brings a case of diversified embryos. Cooper consistently states throughout the film he would do everything in his power to cancel Plan B becoming a reality; a strong emotional draw as he desperately wishes to reunite with his family back home.

At 169 minutes, Interstellar is Christopher Nolan’s longest film and its runtime is warranted thanks to its riveting story and spiritual undertones, mixed with high-tech adventure. Shot in IMAX 70mm and anamorphic 35mm, the film does a good job of balancing the raw drama with briskly paced sequences — the atmosphere leaving me in awe throughout.

Nominated for five Academy Awards, the film ran away with one for Best Visual Effects — and deservedly so, as I’ve laid out in this review. It was also recognised for its poignant score, sound mixing, sound editing and production design, while being overlooked for a Best Picture nod, much to the confusion of people like myself who confidently label it a masterpiece. It would’ve also been nice to see Christopher Nolan acknowledged for his directorial effort comparable to other gems in his distinguished filmography.

Showcasing golden trademarks of science fiction, Interstellar is a landmark film about space travel, life after Earth and human reliance. 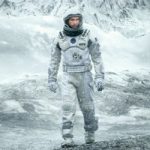