Mark Wahlberg and Rose Byrne star alongside each other in Instant Family, a humorous and at times overly sentimental comedy/drama.

It’s an interesting comedy pairing and the jokes are undeniably rooted in real life experience, which is nice to see. Writer/Director Sean Anders apparently drew inspiration directly from his own experiences with adoption.

After coming across a website outlining the difficult lives of orphaned children, Pete and Ellie (Wahlberg and Byrne) decide to adopt some young children to fill the void in their lives. Attending a training course for becoming adoption candidates, a host of colourful characters are introduced. Octavia Spencer and Tig Notaro are great as the cynical but well-meaning administrators. Allyn Rachel is also hilarious as the single woman obsessed with adopting a black basketball player.

Unable to find an available child, Pete and Ellie accidentally wander over to the no-go zone, the teenagers, where they are mocked by the sassy young Lizzy (Isabela Moner). This starts a bond, and they soon find themselves adopting Lizzy and her two Latino siblings Juan (Gustavo Quiroz) and Lita (Julianna Gamiz).

There seems to be a genuine affection between the cast members and they clearly had fun making the movie. As the bond between the family grows and complications increase, the movie gets frequently more soppy and sincere. Don’t get me wrong, it’s genuinely touching in places but by the end, it’s laid on so thick, it’s like the fried chicken and waffles equivalent of heartwarming – nice, but just enough to make you a little sick.

The cast performs with real gusto in Instant Family, and whilst it’s not going to be a cult favourite, I think the film will relate to anyone who’s familial ties fall outside of the norm. It’s a film that finds deep empathy for the misfits of the world, which is always appealing.

Byrne and Wahlberg work together well; Byrne reprising her Bad Neighbours (2014) role as a defensive and irritable mother. Wahlberg is likeable too and seems increasingly suited to comedy.

The kids pull off some remarkable acting as well. The little boy Juan is extremely loveable as the well-meaning kid who always breaks things and injures himself. There are moments of burst-out-loud laughter, but mostly the film shows too much restraint, opting for a realistic view of the child welfare system and empathy over more outlandish comedy. I can’t help but feel if the director had been able to detach himself more from the personal element, this could have been kicked to the next level, comedy-wise.

It does make you think about the kids living without families and may generally make some people decide to go down the adoption route themselves, which the director deserves credit for.

In the end, Instant Family may get stuck on the fault line; a little too out-there for mainstream family audiences, but not quite intelligent enough for a cult comedy audience.

This was the third collaboration between director Sean Anders and actor Mark Wahlberg. Their previous two films were Daddy’s Home (2015) and Daddy’s Home Two (2017). 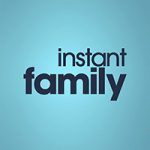