Jack Black, known for being quite the comedian. Cate Blanchett, known for her more serious roles. Owen Vaccaro, not yet known for much. Together, the three make for a curious team as they endeavour to save the world from evil in the new fantasy film The House with a Clock in its Walls.

The film follows Lewis Barnavelt (Owen Vaccaro), a young boy recently orphaned and sent to Michigan to live with his estranged uncle. Uncle Jonathan (Jack Black) is a warlock, or a ‘boy-witch’, as Lewis later defines it. Initially, Uncle Jonathan does a pretty poor job of hiding his powers from his nephew, and it isn’t long before he shares his secret with the boy. Uncle Jonathan’s neighbour, close friend and sure-to-become-surrogate-mother of Lewis, Mrs Zimmerman (Cate Blanchett), also practices magic.

Upon allowing Lewis into their inner-circle and teaching him the art of witchcraft, Lewis discovers that there is a clock hidden somewhere within the walls of the house. To their detriment, neither Uncle Jonathan nor Mrs Zimmerman explain to Lewis that the clock is dangerous. It had been planted there by an evil, now-dead warlock and the previous owner of the house, Isaac Izard (Kyle MacLachlan). As Lewis tries to fit in at school, he inadvertently raises Isaac Izard from the dead, bringing about certain human annihilation. Directed by Eli Roth, The House with a Clock in its Walls is a spooky sci-fi that had my heart racing time and again. The cinematic risers coupled with the lingering shots worked together to create one heck of a jump scare, and Roth was not shy in holding back with those. At one point, I found my limbs covered with chills and wondering if the film were such a good one for younger audiences. Perhaps I’m just a scaredy cat. Perhaps not.

Jack Black and Cate Blanchett, though an unlikely duo, pulled off a grand performance as fellow magicians. The comical banter and friendly rapport between their characters was both believable and entertaining. However, Owen Vaccaro was intolerable to watch. Boring and predictable, his emotional scenes were so obviously staged that I found it impossible to resonate with his character.

The CGI was all over the show, with some scenes being quite beautiful and others downright phoney. That being said, I do believe that the younger audience The House with a Clock in its Walls is aimed at could really enjoy the film, so long as they aren’t afraid of the dark, purple octopi/snakes, zombies, shapeshifters, devil pumpkins, life-size animated dolls or topiary griffins.

This movie is Eli Roth’s first movie to not be rated R. 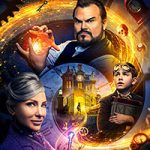