The anticipation for Hold the Dark was high for this reviewer as its director Jeremy Saulnier had shown strong promise with his two previous features, Green Room (2015) and Blue Ruin (2013).

It’s a little unfortunate to say that his third outing comes up short, mainly due to a muddled and often confusing screenplay. What makes it worse is that despite some glorious cinematography and well-staged action sequences, the sluggish story overshadows Saulnier’s talent as a filmmaker.

Hold the Dark does start out strong, with wolf hunter Russell Core (Jeffery Wright) being hired by Medora Slone (Riley Keough) to find her missing boy, who was believed to be taken by wolves. After a brief search, it doesn’t take long for Russell to realise that there is more going on than meets the eye, as he is plunged into a darker world that’s way over his head. To add fuel to the fire is Medora’s husband Vernon (Alexander Skarsgard), who is returning home from war after being wounded. Once he finds out the truth about his son, the blood begins to flow.

That’s about as much that can be said about the plot without spoilers, along with the fact that it’s also about as straightforward a plot as it gets. The most frustrating thing about Hold the Dark is that it builds promise on so many occasions, then ultimately lets you down every single time. The great thing about Jeremy Saulnier’s previous efforts is that they had really strong finales, whereas here everything just seems to fizzle out and just, end. There are however some strong sequences, with the standout being a shootout involving a group of police officers against one man with a giant machine gun. Lasting close to ten minutes, it’s one of the better action scenes shot in recent years as the tension and carnage piles up by the second. It’s just a shame the rest of the movie doesn’t land on its feet the same way.

The performances are generally strong all around, especially from Skarsgard as the methodical and very dangerous Vernon Slone. It’s a good change of pace for the actor after so many flashy roles and proves that he may just be able to follow in his father’s (Stellan Skarsgard) acting footsteps. Jeffrey Wright brings his usual demanding yet quiet presence to the lead role, and James Badge Dale who plays Sheriff Marium is equally good, yet underused.

Whilst Hold the Dark isn’t a write-off altogether, it just may be better to keep expectations low and immerse yourself in the beautiful cinematography that takes full advantage of the Alaskan wilderness. It may even pay to watch director Jeremy Saulnier’s previous works after viewing this film if you haven’t already, just to see what he’s fully capable of as a filmmaker and showing how to film one hell of a finale from his own screenplays (this is the first film directed by Jeremy Saulnier where he didn’t write the script).

It took 61 days to shoot this film. 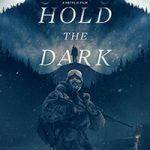