You’re a young man, you struggle to keep a roof over your head and support two young kids and an ex-wife’s child support in 21st century Texas. Enter your brother, an ex-convict with a history of bank robberies and a penchant for breaking the law — this is Hell Or High Water, the story of two brothers who must pay off their family ranch before it’s seized by the bank.

Chris Pine and Ben Foster star as Toby and Tanner Jones, playing their parts as the two desperate bank-robbers with sheer authenticity and panache. Jeff Bridges, whose role in this film is deserved of recognition from the Academy Awards, channels the anxiety and charisma of a retiring policeman, whose own demons are met with poignancy throughout the film. The rest of the supporting cast work well as a foil for the three main characters to illustrate their story on-screen. The Texas accents are rich and the milieu is wonderfully depicted by director David Mackenzie, doing wonders for the film in the same way the Coen Brothers’ No Country for Old Men found success; monotonous, poetic and above all, beautiful.

I had an absolute blast with Hell or High Water, a film that presents its story in an unpretentious manner, while also scoring points in various departments including, cinematography, performances and set design. The film begins with two bank robberies in country Texas, establishing itself from the get-go. The boys only stick to smaller branches of a certain bank and only take money from the front desk, making their prize untraceable. On their tail soon after is Marcus Hamilton (Ed Tom Bell 2.0 aka Jeff Bridges) and Alberto Parker (Gil Birmingham), two high-ranking senior policemen. Marcus is in the twilight of his career and on the verge of retirement, and Alberto is a slightly younger half-Mexican, half-Indian man who is set to replace the former once Marcus retires. The film is oozing with repressed angst that is just waiting to blow up right in everyone’s face, though there is also a lighthearted feel to the film, with some casual humour that adds a nice touch to what could’ve been yet another generic heist flick. Experiencing a versatile range of situations, the film’s plot compliments the platform it’s given, without becoming a detriment or losing steam, remaining solid in its roughly 102 minute runtime. This neo-western is a slow burn that eventually explodes into an unforgettable climax riddled with metaphor and tension.

With Oscar season looming, David Mackenzie’s 9th feature film is making a big statement, staking a claim as one of 2016’s best movies. A riveting and effective cops-and-robbers flick with a moderate dosage of art and uniqueness, that utilises bleak landscapes and extremely likeable characters, making us empathise with both sides of the story. There is no real antagonist in Hell or High Water, only the demons our heroes are forced to tackle in order to get the job done.

The phrase “come hell or high water” typically means “do whatever needs to be done, no matter the circumstances”. It also refers to the “hell or high water clause” which is a clause in a contract, usually a lease, which provides that the payments must continue irrespective of any difficulties which the paying party may encounter. Both definitions apply to different parts of the plot in this movie. 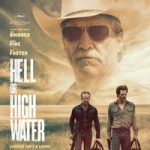