The film attempts to combine the unique groundhog-day style concept with a basic college teen-movie, under the guise of a classic slasher-horror film. It works for the most part, however this film plays out more like a teeny-bopper film rather than a horror, as it’s not very scary. The unsubtle jump-scares might be enough for some, but the horror element generally takes a back seat to Tree’s personal story of self-discovery as she goes full circle from being the classic bitchy ‘it’ girl, to one that is, basically normal – a tolerant and friendly young individual.

The narrative angle that has Tree reliving her death over and over again is used as a catalyst for her to discover the error of her ways, while throwing in a murder-mystery element that sees her on the case to find out who her killer is. When you break down the film like that, there’s a lot going on here which is smart for a film like this, but it doesn’t excel in any one area. There’s comedy in it, but it’s not that funny; there’s horror, but it’s not scary; and the teen-sorority setting along with the characters has all been seen and done in countless numbers of teen movies before this one. Nevertheless, Happy Death Day is still a moderately entertaining popcorn mixed-theme film. Helping us get through the film is its principal cast that includes Tree’s Jessica Rothe and her love interest Carter, played by Israel Broussard. Rothe is given the opportunity to show a wide range of characteristics, as the plot allows her to change her personality ever so slightly each day, and she aces each different version of her character. Broussard has a bit less to do and his character is fairly cliché, however the two young stars together make for a charismatic and easy-on-the-eyes duo. The supporting cast of frat-house jocks, geeks and bitchy teens that feature throughout the film serve their purpose for entertainment’s sake, but again there’s nothing new there.

When it comes to the film’s horror aspect is where the film suffers the most. Director Christopher Landon fails to strike the perfect balance between each of the film’s main themes, which in turn makes the horror angle for this one feel second rate. Where teen-slasher films like I Know What You Did Last Summer (1997) and Scream (1996) put all the focus on the horror with excellent results, Happy Death Day uses it almost as a way to insert itself into that genre in order to find some fans, and whether you love or hate this movie, there is a broad target market here, and there will be fans.

Happy Death Day might not end up being the most memorable entry into the horror genre for 2017, but its multiple themes and charismatic cast definitely make it worthy of some guilty-pleasure viewing.

Originally titled “Half to Death”. 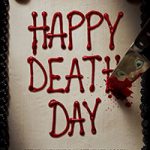