The Handmaiden is the latest film from Korean auteur Park Chan-wook and the great man doesn’t disappoint in what is his most grandiose effort yet.

The film is set in 1930’s Japanese-occupied Korea, where the con-man Count Fujiwara (Ha Jung-woo) hires the services of petty thief Sook-hee (Kim Tae-ri) to become the handmaiden to a wealthy Japanese heiress, Lady Hideko (Kim Min-hee), in a ploy for the Count to wed and ultimately rob the Lady of her immense wealth. Things turn sour when Lady Hideko and Sook-hee develop a sexual relationship.

Chan-wook has never been one to shy from adult themes in his films and The Handmaiden is probably the most adult-themed of all his films, featuring candid sex scenes as well as the director’s trademark inclusion of gut-wrenching violence. But it takes a while to get there due to the film’s lengthy 144 minute run time.

The story is told in three parts, showing a different perspective in each. Not all of the parts are equally entertaining and it is a bit of a slow-burn all the way through, but this director is a modern-day master of intrigue, giving just enough away to keep the story flowing, humouring and shocking you at just the right moments, before you even have the chance to consider tuning out. The film also contains a few big twists, which is another signature attribute of the director’s style – and that’s about all that can be said about that without giving anything away. The Handmaiden is best viewed without knowing anything but the basics of the story. The performances are excellent across the board, as each of the principal cast members bring a peculiar type of oddity to their character, to the point where each character is interesting enough to have their own spinoff film. The characters are bizarre, but that feels like it’s mostly due to the situation they’re in and possibly a sign of the times. Under the Japanese rule of that era, it appears some of Korea’s country-folk may have been facing a bit of an identity crisis, or at least they were in this film.

From a visual standpoint, the film looks amazing. The director has used his regular cinematographer in Chung-hoon Chung, who also provided his talents to Chan-wook’s other films such as Stoker, Thirst and Oldboy – all beautifully shot films. The superb cinematography as well as the film’s hypnotic score is pivotal to the overall eeriness of the film, drawing you in emotionally just as much as the characters and story do.

With an already super-impressive body of work, The Handmaiden certainly stands as Park Chan-wook’s masterpiece, and in a time where the majority of films the general public is subjected to have gone through the censorship ringer, this film is not afraid to go where mainstream cinema is – to a place of depravity that you just can’t take your eyes off.

Sook-Hee is named after Sue (Susan Trinder) in the original novel ‘Fingersmith’ by Sarah Waters and Lady Hideko is named after Japanese actress Hideko Takamine. 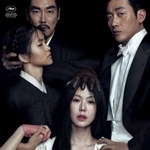 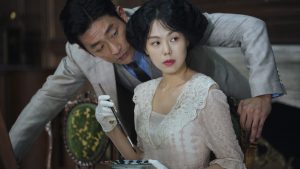 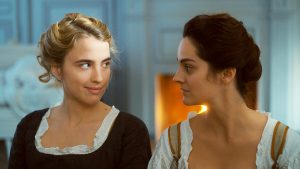 Sounds interesting, keen to check it out!