Mel Gibson returns to the director’s chair after 10 years and if any project is going to get him back into Hollywood’s good graces, then Hacksaw Ridge is it.

Desmond Doss (Andrew Garfield), a man with dreams of a medicinal career feels obliged to join the fight against the Japanese during World War 2, however his belief system does not allow for him to bear arms. Much to the dismay of his alcoholic father Tom (Hugo Weaving), Desmond enlists in the army and manages to secure a spot as a battlefield medic, though not before being heavily scrutinised by his fellow soldiers and commanding officers.

Doss’ story is one of pure heroics, and based on true events, as he became the first Conscientious Objector in American history to be awarded the Medal of Honor. It’s a harrowing thought, entering the battlefield and facing near-certain death – and not being able to protect yourself, yet he did it, and in the process saved multiple lives. The film shows us Desmond’s background which gives us an insight into his reasoning – as any sane person would consider it crazy not to carry a weapon in a war-zone. It’s handled exceptionally well by director Mel Gibson, who produces some of his best work yet.

The direction of Hacksaw Ridge is akin to that of a director who has mastered the craft with a career spanning 50 films, yet this is only Gibson’s 5th film. While the film doesn’t reach the greatness of Braveheart, it gets pretty close. Gibson manages to get the most out of his actors, connecting the audience to their plight, while putting on a raw and explicit look at the horrors of war. Andrew Garfield steals the show in the lead role, almost singlehandedly having to carry the film on his shoulders. He does get help though, from a stellar supporting cast that includes Hugo Weaving, Vince Vaughn, Sam Worthington, Teresa Palmer and Luke Bracey, who are all on the mark with their performances. Admittedly though, it was at times hard to take Vince Vaughn seriously in a dramatic role, as he’s normally known for his comedic work.

RELATED:  'Nine Days' Review - Profound Themes But it's Too Pretentious

The film shines the most when the soldiers hit the war zone in the battle to claim Hacksaw Ridge. Mel Gibson if nothing else, is a master at delivering epic battle scenes, and he surpasses all his other work in this film. The film’s battle scenes are the type that put you right in the middle with the soldiers, making you feel every bit as tense as they may have felt being there in real life. This amazing depiction of war makes up for some tedious storytelling in the first half, along with some corny lines spread out through the film.

As an overall viewing experience, Hacksaw Ridge is hard to fault, but is not faultless. There’s definitely a bit of Hollywood glamorisation involved which probably shouldn’t have belonged there, however it does make the film a bit more accessible to a wider audience. It’s what makes the difference between comparing Hacksaw Ridge to the supremely great films of the genre, such as Apocalypse Now and Full Metal Jacket. Unfortunately Hacksaw Ridge may not reach the classic status of those films, although as far as modern war films go, it’s definitely one of the best – and easily one of the best of the year.

When asked how many lives he saved, he approximated 50. However individuals that witnessed the heroic event said it was closer to 100. The mutual agreement was reached at approximately 75. 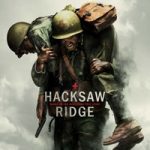