Single location films aren’t easy to pull off and on the rare occasion when done right (like in 2010’s Buried) they can be quite engaging and fast-paced. The Danish-set The Guilty, without a doubt, falls into the engaging category, but not only does it keep our adrenaline pumping, it unfolds layer upon layer with a situation you don’t see coming and will leave you assessing what our protagonist (and the audience) has had to deal with after the final credits roll.

The protagonist in question, Asger Holm (Jakob Cedergren), is a suspended police officer who is temporarily assigned as an emergency call operator. In what seems like a standard night, Asger receives a call from a distressed woman who says she’s been kidnapped by her ex-husband and is being driven to an unknown location. Asger also learns that their two children have been left home alone, one of which he communicates with simultaneously, revealing this will be a more serious situation than first thought.

It’s hard to go into any further plot details of The Guilty because it’s simply a case of the less you know, the better. There are several other minor details, one being that Asger is to be in court the next day for something that isn’t revealed until the end and may or may not play a part in the situation he’s dealing with.

RELATED:  'The Father' Review - An Emotional Story with Masterful Performances What The Guilty does so well is that it keeps you guessing along with Asger as to what is happening as we see (more so hear) the situation unfold through his eyes. The entire film is set in one office with some minor interaction with other staff members, though most of the other main characters are not seen but heard with over the phone. It is not an easy ploy to pull off in film, but thanks largely to a great screenplay and tight direction by Gustav Möller, The Guilty achieves exactly what it sets out to do.

As Asger, Jakob Cedergren has the tough task of keeping the audience along for the ride with him and he successfully pulls it off, showcasing a character that has just as many layers as the unfolding story itself. And despite some unorthodox decisions his character decides on, it all makes sense as to why he’s doing them in the first place as we learn more about him by the end of the film.

The Guilty certainly proves that a great film lies in its screenplay and it’s a blessing that everything else including performances, editing and direction all fall in the right places. If you’re looking for a taut, character-driven experience that keeps you guessing until the very end, then this film will not disappoint. It would be good to see this minor release get the attention it deserves.

The director, producer, cinematographer and the editor all knew each other and graduated from the National Film School of Denmark. 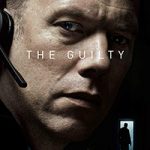