‘Guardians of the Galaxy Vol. 2’ – Review

Guardians of the Galaxy Vol. 2 is an epic, technicolour smorgasbord of fun-filled galactic adventure, with characters you just can’t help but love.

Just try to say you didn’t like any of the characters in this film after seeing it – you can’t. All of the Guardians from the first film are back and more developed, and with them come some new additions in the way of Mantis (Pom Klementieff) and Ego (Kurt Russell) amongst others, which are all welcome additions to the fold, and ones that expand the gigantic universe established in the first film even further. Having so many characters featured in a film can cause it to become bloated, with some characters hogging the spotlight, whilst others are left behind leaving us wanting more. In this instance, director James Gunn has managed to find the perfect balance in terms of dedicating enough screen time to each character (including the supplementary ones), to allow for the audience to feel some type of emotion towards each one.

This balance is superbly helped along by the contrasting personalities of each character, along with each actor’s portrayal of them. The returning cast including Chris Pratt, Zoe Saldana, Dave Bautista, Bradley Cooper and Michael Rooker have all made their characters their own, serving up as genuine a portrayal as you can get. Having also starred in the first film together, the lead actors have all formed a natural chemistry with each other which can explicitly be seen through their performances. And let’s not forget Vin Diesel as Baby Groot, who can only speak a total of three words, but still manages to convey a wide range of emotions and reactions thanks to the excellent visual-effects and motion-capture work by the film’s crew. Guardians of the Galaxy Vol. 2 is a colourful (literally) adventure through the galaxy that sports some fantastic production design. The filmmakers have by this stage managed to expertly blend computer graphics with practical effects, making for some jaw-dropping visuals. The film essentially looks like a live-action cartoon, but isn’t in any way tacky, but rather the effects enhance the overall experience. It’s one element that Disney/Marvel have been improving on in film after film, with the culmination of years of experience being highlighted here.

One thing that the aforementioned production powerhouses still can’t seem to master is their films’ stories. The plot of Guardians of the Galaxy Vol. 2 isn’t very original and by the end it falls back into common territory, that of a world/galaxy ending threat that the Guardians have to defeat. By this point there’s no real reason to expect anything less from these mega-blockbuster films, but it would’ve been nice to skew away from the regular story tropes we’re used to seeing. Thankfully, Guardians differentiates itself from other films by placing a big focus on the theme of family. It’s a bit on-the-nose at times, but is handled well overall, adding that extra bit of substance that a film like this needs.

Guardians of the Galaxy Vol. 2 brings back everything we loved about the first film, and adds even more to the overall viewing experience. It’s expertly directed, written and performed, with a great soundtrack. As an added bonus, the film is even funnier than the first, which should help please viewers that have an aversion to blockbuster-spectacle-type films. Guardians is hard to fault and it genuinely offers something for everyone, making it one of the best to come out of Marvel’s large stable of films.

Kurt Russell has appeared in many Disney films over the past fifty-one years. Guardians of the Galaxy Vol. 2 (2017) will be his first Disney film, and superhero film, in twelve years. Excluding Sky High (2005). 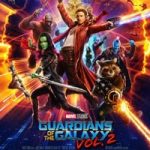