Gringo is reminiscent of the early Tarantino and Coen-brothers films that dominated the mid-90’s. Sadly, director Nash Edgerton lacks the skill and finesse to bring the multiple plots and double-crossing characters together with the same style.

Harold Soyinka (David Oyelowo), a Nigerian immigrant, moved to the US in pursuit of the American dream, naively believing that hard work and integrity was the key to achieving it. However, he finds himself stuck in a dead-end job in middle management, facing personal bankruptcy and being hoodwinked by his unfaithful wife (Thandie Newton). His employer, a Chicago-based pharmaceutical company is run by the egocentric Richard Rusk (Joel Edgerton), masquerading as Harold’s best mate. The company is mass-producing a medical marijuana pill in Mexico, in anticipation of its legalisation in the US. In the meantime, management has secretly been using off-the-book sales of the pill to a Mexican drug cartel, to prop up the company’s struggling finances. Harold is sent to the plant in Mexico to account for the missing inventory and is accompanied by his manager and ruthless company executive, Elaine (Charlize Theron). They are really using the trip to carry out some internal housekeeping and unbeknownst to Harold, their real purpose is to end their dealings with the Mexican cartel ahead of a secret company merger that will put him out of a job.

While in Mexico, Harold disappears, apparently the victim of a $5 million kidnapping scheme based on the belief that the ransom will be covered by the company’s insurance policy. However, the policy has lapsed and profit-focused Richard and Elaine have no intention of paying anywhere close to the demanded figure for a person in middle management. Instead, Richard learns that the company’s life insurance policy remains in place and enlists the services of his ex-mercenary brother Mitch (Sharlto Copley), to resolve the situation. Unassuming Harold now finds himself a pawn in an assortment of financially motivated schemes as he is pursued by an assortment of characters, including the disgruntled Cartel. Established stuntman, director and Aussie, Nash Edgerton, has assembled an outstanding cast including his own brother, Joel, who also worked with him on the Australian 2008 drama The Square. Sadly, with so much going on in Gringo, very little time is spent on character development and his assembled talent is largely underused. While there are impressive stunts and a couple of standout performances, a great deal of the film feels messy and unevenly paced. The action scenes are where Nash Edgerton’s real strength as a director shine, but they come so late into the film that the viewer is likely to have become overwhelmed by all the converging storylines and deception to fully appreciate them.

Charlize Theron appears to relish the opportunity to play an over-the-top character who is manipulative and amoral. She uses her body and sexual power as a tool, with her colleagues as mere stepping-stones on her ascension of the corporate ladder. Her performance is a delight to watch but as she only plays a supporting role, her absence for large parts of Gringo is felt. Oyelowo delivers a solid performance but his character is so thinly written that it is hard for him to get the audience to really invest and empathise with Harold. His character lacks any development arc and is reduced to being a hapless victim at the centre of multiple schemes.

Amanda Seyfried and Harry Treadaway are reduced to a subplot, as a couple staying in the same hotel as Harold, that adds little to the film and it is largely unnoticed when their storyline disappears almost entirely. Thandie Newton’s performance is so brief that it feels like she was cast for a single gag in the closing moments of the film. Joel Edgerton seems to thrive playing a despicable, sleazy character that personifies a dark viewpoint on American corporate greed. The narrative contains some clever moments but the film has too many twists and turns for its own good, with numerous subplots and characters that disappear from the storyline for large portions of time. Writers Anthony Tambakis and Matthew Stone have created a mixture of black comedy and action with some promising ideas and elements. Unfortunately, they seem to have been so busy constructing curveballs to keep the audience guessing, that they never took the time to flesh out the film’s characters and left the audience without anyone to barrack for.

While Gringo is entertaining with some great comedic moments, by the end of the film, all the double, triple-crossing and plot twists will leave you feeling exhausted.

The character of Harold was rewritten to have a Nigerian background after David Oyelowo was cast. Oyelowo pitched director Nash Edgerton on the earnest naivety that such a character could bring. 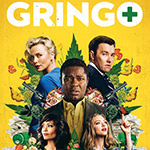 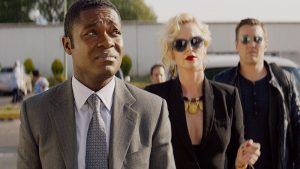 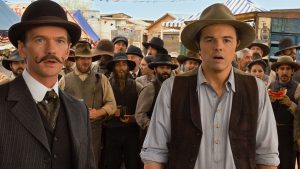 ‘A Million Ways to Die in the West’ – Review 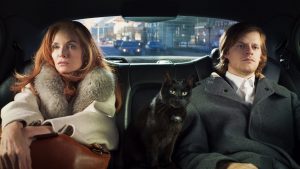