Acclaimed director Zhang Yimou’s The Great Wall lacks any real substance, but it does compensate with some stunning visuals and exciting action sequences.

The two mercenaries William (Matt Damon) and Tovar (Pedro Pascal) are searching for a powerful black powder when their road leads them to a stronghold at the Great Wall of China. It’s there they learn that a devastating enemy is set to swarm the wall, threatening their own lives, as well as the lives of all humanity. The two must decide whether to stay and fight, or take what they need and move on.

The film’s story is thin at best – a stranger in a strange land forced to question their sense of purpose in life and redeem themselves of past troubles when put to the test. It’s a common trope that can still usually hit home when done right, however in this instance, a lack of character development hinders that potential. We’re given hints to the true nature of Damon’s and Pascal’s character backgrounds that suggest that these are two bad guys, willing to do anything to accomplish their goals. In reality though, the story doesn’t give away enough of their history to have us really see and feel the redemption for these characters come about, which is a shame as it would have added a much-needed extra element to the story. Instead Yimou appears to focus on the spectacle of it all, and hits it out of the park. The Great Wall is at its best when there is action to enjoy, and to compliment that action, the film scintillates with its dazzling use of colour. Anyone familiar with Yimou’s past work will already know that gorgeous visuals play a huge part in his films and it’s no different for this one. The filmmakers have spared no expense on the attention to detail of the film’s costume and production design, as well as the cinematography. The sets, along with each of the character outfits have been meticulously crafted to provide an enticing visual experience for the audience, and is especially true in scenes where the CGI has taken a back-seat to the practical design – which isn’t that often in this film.

The Great Wall, like many modern fantasy-adventure blockbusters, relies heavily on the use of visual effects. It generally works well in this film, though there are some hit-and-miss instances. The creature design is impressive, but still a bit too heavy on the effects composition. The IMAX screen and 3D add to the overall experience, though it will be a subjective experience, as at times it may feel overwhelming for some.

The Great Wall is a moderately entertaining film that should please anyone looking for a guilty-pleasue, mindless popcorn-munching film. To that degree, the film is a success.

This is the most expensive Chinese film ever made. 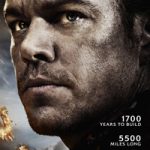