In the vain of teen-comedy films like American Pie comes Good Kids, featuring a talented young cast, some laughs, and an all-round good time.

Four socially awkward friends decide to make the most of their final summer-break together before heading off to college, by attending parties and indulging in alcohol, drugs and sex – all the typical stuff on the minds of 18 year-old American teens.

Good Kids’ story features all the teen-comedy film tropes that have preceded it; having fun; finding love; finding sex; fitting in; getting drunk; getting into trouble and so on. It features a usual cast of common character types, such as your geeks and jocks etc. So in this respect there’s nothing we haven’t seen before, yet there’s still an audience for these types of films as they keep getting made. Why? Well there’ll always be a new era of teens, of whom this film is clearly targeted to (there’s definitely a lot in it for your young-at-heart adult audience too, though maybe to a lesser degree). Fans of teen-comedies in general should get a kick out of it, though anyone looking for something that will have them rolling around on the floor laughing may need to look elsewhere. A peculiar thing about the film was that the titular ‘good kids’ did not seem particularly geeky or un-cool, but rather just more unsure of themselves than anything, which may come across as a bit strange to some viewers, however it’s a welcome change compared to the standard stereotypical geek-types we’re usually fed in these sorts of films. But often it’s the use of these stereotypes that get the most laughs, so it’s possible the film’s comedy may have suffered for it. The film’s four lead actors however, are all great up-and-comers, with lots of potential.

Good Kids is director Chris McCoy’s first feature film and it shows. There’s nothing specifically bad about his direction, however he hasn’t attempted to push the boundaries of the genre in any way, reverting to common attempts to gain a laugh from the audience. Playing it safe can still often be rewarding, however when going up against the big mainstream players in today’s teen-comedy film world, you’d be better off taking a risk on the comedy front and giving people something to talk about afterwards – this film doesn’t reach that level unfortunately.

The 70’s had Animal House, the 80’s got Revenge of the Nerds, the 90’s American Pie, the 00’s Old School, the 10’s… Good Kids? Not quite, but as a middle-of-the-pack film in this particular sub-genre of comedy, it holds its own and offers a night of humorous easy-viewing cinema.

The screenplay for this film was featured on the 2011 Black List; a list of the “most liked” unmade scripts of the year. 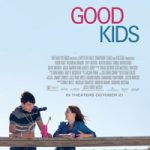