This decade’s answer to Superbad (2007), Good Boys is everything you would expect out of a child-led film produced by Seth Rogen and Evan Goldberg. It’s crude and it’s crass but it’s also sweetly innocent and hopeful.

Max, Lucas and Thor are the Beanbag Boys, and they’ve just been invited to their first-ever “kissing party”. Their quest to sharpen up their (non-existent) smooching skills leads them to steal Max’s father’s drone to spy on the classic party-drug teenager-next-door Hannah (Molly Gordon). When Hannah and her friend (Midori Francis) capture the drone and hold it ransom, the Beanbag Boys are pulled into a world of stolen drugs, police run-ins and frat house paintball fights, in order to replace the drone before they are all grounded. Getting to the kissing party is the ultimate goal.

The gags come thick and fast, relying heavily on the “kids say the darndest things” trope. A sex doll is mistaken for a CPR doll, a sex swing is mistaken for a regular swing, a tampon is to stop babies coming out… You get the idea.

These foul-mouthed tweens are gunning to shock you with every obscene remark and questionable decision they make, but there is more to this film than just depicting every 12-year old’s ideal day of truanting. This is a film about friendship, growing up, and the often-confusing way relationships change as childhood melts into young adolescence.

A well-written, fast-paced plot isn’t the only drawcard for Good Boys – the leading boys are exceptional young actors and bring their characters to life with skill and finesse. The Beanbag Boy’s ringleader, Max, is portrayed by the endlessly talented Jacob Tremblay, who co-starred with Brie Larson in Room (2015). Tremblay has grown up since his Critics’ Choice Movie Award for Best Young Performer, but he will still have you cringing at his perfect depiction of tween naivety. Keith L. Williams is a comedic powerhouse as lovable Lucas with his high-pitched scream and inability to lie. Brady Noon who portrays Thor, the slightly bullied, musical theatre-loving dork desperate to be one of the cool kids, rounds out the trio. The dynamic of the three leads is electric and very accurate.

Rated MA15+ due to the vulgar jokes and inappropriate themes, the young stars of this film wouldn’t be able to watch Good Boys in the cinema. This most likely won’t stop hordes of young teenagers attempting to see this hilarious film. 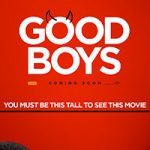