Golden Years is a light-hearted British crime-caper that covers some genuinely concerning topics while keeping viewers enthused until the credits roll.

After losing their entire pension, senior citizens Arthur and Martha Goode (Bernard Hill and Virginia McKenna) decide to fight the system by pulling off a string of ‘armed’ bank robberies.

It’s an unusual premise as you wouldn’t expect elderly folk to resort to a life of crime to get through their twilight years, though the concept seems to work in John Miller’s film about the worrying thought of losing your life savings at a time when you need it most. Miller has that theme running behind the film’s playful tone, which essentially cheapens the effect of the gravity of the situation, but does make for entertaining viewing, which is all the film appears to be going for.

The film’s story and themes lack density, however the performers and characters are its saving grace. The characters are all very likeable and well written; a bunch of jovial ageing citizens happy to make the most of the time they have left through life’s simple pleasures. Of course the actors must be commended for getting that across to the audience, with Bernard Hill leading the way and being the backbone that holds the film together. His character Arthur is one that you can empathise with the most, as Hill draws you in with ease. The remaining supporting cast all do well to help portray the camaraderie between the main troupe of characters, each with their own unique personality traits.

RELATED:  'The Mitchells vs. the Machines' Review - Outstanding Timely Animation

One thing Golden Years has going for it is its humour. It’s a blend of jokes that fall somewhere between tongue-in-cheek, slapstick and crude, while still being universally acceptable and light in tone. It’s this type of humour that keeps the film going with its use of excellent pacing and timing, especially in some instances where the film begins to lean to tediousness (though it’s minimal).

Golden Years is the type of film that might cater to a specific senior audience and will likely fly under the mainstream’s radar, however it does offer a rewarding experience for anyone willing to venture outside of the box.

The director’s wife and children are the family waiting to use the toilet when Arthur is in there. 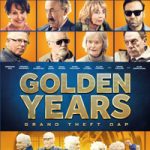