Taiwanese director Chung Mong-Hong’s Godspeed, is the most bizarre, hilarious, and gruesome account of a drug-culture caper film to have recently hit our screens.

The film tells the story of a washed up rebel named Na Dow (Na-Dou Lin), who stumbles into becoming a drug mule following his response to a job advert in the local paper. Having quickly landed the position, he’s informed by a mysterious boss over the phone that he must transport drugs south of the city for an upcoming job. Searching for a way to make it on time, he finds himself hopping into the beaten up taxi of Old Hui, played by the Hong Kong comedy icon, Michael Hui. The unlikely pair begin their journey with a failed attempt at trying to grab a bite to eat before hitting the road, setting the tempo for a road trip which will be anything but ordinary, and everything but mundane.

Entangled in the dark lives of gang lords and brutal murders, the pair build an unlikely friendship established on foundations of trust and good old fashioned coincidence. As the film progresses, it becomes clear that their companionship is necessary to balance out the gruesome, Tarantino-esque executions and assaults which saturate the film. It’s unlikely that shootings, stabbings, cuttings and punches have ever looked as beautifully creative as they do awfully absurd on screen, however, Mong-Hong’s ability to match magic with fear is to be heroically praised here. What would seem as a traditional caper narrative, therefore, is drastically enhanced and progressed by Mong-Hong’s impressive visual techniques and the deepest of dark humour. The film is laced with creative camera angles, uncomfortable lingering close ups, and vibrant splashes of colour and sound.

The unpredictability and entertainment of the road trip itself is matched and mirrored by the unique stylistic film choices, making the pairing of a story and creative vision never before so beautiful, unpredictable and loud. What’s interesting, is that due to such a chaotic mix of humour and solemnity, the film itself lingers between genres, never edging into the peripheries of becoming too funny or too serious enough to enjoy. It’s a perfect in-between; a sharp and intense tale of two strangers becoming friends against all odds.

Godspeed has been a favourite at several film festivals, including the 2016 Golden Horse Film Festival and the 2017 Asian Film Awards.

Godspeed is screening as part of the 2017 Melbourne International Film Festival (MIFF), with its second and final screening on 18 August 2017. 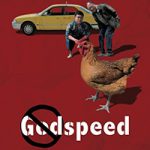