Football fever has hit Australia with the Socceroos making the World Cup, and now the release of cinema’s first football blockbuster, Goal!

Directed by Danny Cannon and starring up and coming Latino actor Kuno Becker, Goal! follows the story of Santiago Munez’s (Becker) dream of becoming a professional football player and the trials and tribulations that go with it.

After being spotted at a local match by ex-football player and talent scout Glen Foy (Stephen Dillane), Santiago is given the opportunity to go to England and train with Newcastle United, but his un-supportive father Herman (Tony Plana) and an unfortunate turn of events deem Santiago unable to go and fulfill his dream. With a bit of luck and assistance from his grandmother, Santiago eventually makes it over and begins his up and down struggle to make it in the big league.

As Santiago struggles to get used to the muddy fields of Newcastle’s St. James Park and the antagonism found in the locker room, he romances the club’s nurse Roz (Anna Friel), be-friends Newcastle’s cocky star Gavin Harris (Alessandro Nivola) and gets a first hand look into the glitzy world of pro football, facing the challenges in proving himself to his family and friends and surpassing emotional setbacks on and off the field.

A relative newcomer and Latin American heartthrob, Becker puts forward a formidable performance as the emotive Santiago and is greatly supported by Nivola’s role as Gavin Harris, the multi-million dollar, party-life leading Newcastle player and Glen Foy, the former scout with a keen eye for talent played excellently by Stephen Dillane. Anna Friel plays well the role of Santiago’s love interest Roz, but the two fail to share much on-screen chemistry, making the romance between the two just passable. On the same note, Santiago’s almost immediate friendship with Harris is fallible as the two appear to have very little in common with each other.

Visually, Goal! delivers on the scenic as well as game fronts. Excellent shots of St. James Park and Newcastle’s surroundings, and in-game footage sets an accurate atmosphere of game-play and crowd excitement in the game of football. It features real-life stars on and off the field such as Alan Shearer and several players from Newcastle’s lineup, as well as cameo appearances from superstars Beckham, Zidane and Raul.

Goal! borrows from several of its American sporting movie predecessors (Mighty Ducks, Remember the Titans), conforming to sports movie clichés throughout the film, but it does entertain its audience with its excellent visuals and colourful characters, and the always successful zero-to-hero film formula. Goal! is an enjoyable watch, and should prove favorable to many of the worlds’ football fans and also viewers who take interest in inspirational sports stories. With football fever ever so prominent in Australia, Goal! will surely be a crowd pleaser.

Brian Johnson of AC/DC has an appearance in this film as a Geordie fan. Before AC/DC, he sang in the band “Geordie”. 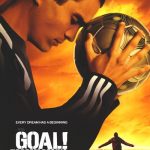 I’ve seen this, didn’t mind it.