Get Out is the first feature film directed by comedic actor/producer Jordan Peele, and he absolutely nails his debut entry into the horror/thriller genre.

Get Out is horror done right. There’s no (ok, limited) use of the classic jump-scare or other cheap horror movie scare-tactics. Rather, Peele uses a sense of dread as the driving force to keep audiences on edge as the film plays out, which is oftentimes scarier than the use of the common horror techniques used to elicit a fright from the viewer. Along with the sense of dread is a deep aura of creepiness instilled into the film, which can only be further explained – or experienced – by seeing it for yourself, as to not give away any spoilers about the film’s plot and characters.

In Get Out, the young couple Chris (Daniel Kaluuya) and Rose (Allison Williams) decide to travel to Rose’s parents house in the middle of nowhere for the weekend, so that Rose can introduce Chris to her parents for the first time. Nothing strange about that right? The awkward part for Chris is that Rose hasn’t told her parents about her new boyfriend’s African-American descent, which sits uneasily with Chris. Rose’s parents Dean (Bradley Whitford) and Missy (Catherine Keener) Armitage quickly put Chris back at ease with their friendly and welcoming demeanour, however he soon finds out that there is something sinister lurking behind his grand acceptance into the family. It’s a plot that has a basic universal appeal and could have worked just as well without the use of the race card. However Peele has deliberately gone down that path to indirectly highlight some of the injustices and social fear felt by African-American people over the course of their history in the United States – that’s going on to this day. The director brings forth these delicate issues in a strangely tasteful and humorous way, without being too preachy or losing focus of the reason audiences are out seeing his film; entertainment.

There’s entertainment aplenty in Get Out, as we slowly get to know the film’s characters and their quirks. The film does an excellent job in switching tones, going from light-heartedness to suspense in what feels like an instant. In a lesser film, this switching of tones could prove disastrous, however it flows perfectly in this film. A lot of the film’s great flow can also be attributed to its lead performers. Kaluuya and Williams shine as the film’s young couple, and their support is fantastic. The entire Armitage family and their friends are all peculiar characters, expertly handled by the actors chosen to portray them.

Get Out is the type of film that will keep you guessing even after you think you’ve figured out where it’s going. It’s funny, tense, scary and superbly creepy. It’s a small film with big ideas, that will leave a lasting impression. It’s a far cry from the seemingly generic mainstream horrors we’re used to seeing, and that is the best thing about the film. A must-see for any horror film fan, but also for anyone that’s yearning for some genuine intrigue and mystery in a modern film.

Jordan Peele was inspired to write this movie by Eddie Murphy. During a stand-up comedy show, Murphy talked about going to meet a Caucasian girlfriend’s parents. 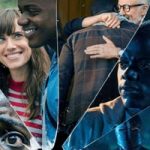