Gerald’s Game is a little surprise package of a film that really packs a punch, and continues to throw jabs left and right until the wince inducing finale.

Gerald (Bruce Greenwood) and Jessie (Carla Gugino) drive to a remote house with plans to rekindle the flame of their fledgling marriage by spending some quality time together. ‘Quality’ time meaning a kinky sex game that Gerald has in mind which sees Jessie handcuffed to the bed, rendered helpless and vulnerable. Things don’t go according to plan when Jessie gets uncomfortable and wants to stop, which causes a pent up Gerald to have a stroke and collapse dead on top of her.

It’s here the film takes a real sinister turn as Jessie’s mind regresses with the shock of Gerald dying in front of her, plus bringing up some unwanted memories from her childhood involving her father (Henry Thomas). What the film does from here is very cleverly play on Jessie’s hallucinations with Gerald, as well as herself at times appearing right in front of her own body, and playing out her thoughts about how much danger she is really in, by not being able to set herself free. Plus the added addition of a hungry stray dog which begins to feed on Gerald’s body as time passes works well, but it is another entity that really ups the horror factor called the Moonlight Man. The tall distorted figure that carries a bag of bones appears as part of Jessie’s deteriorating mind, is pure nightmare fuel, setting the tone for an already unsettling atmosphere.

RELATED:  'Scream' (2022) Review - Meta-Horror Franchise has Run Out of Ideas Director Mike Flanagan really knows how to build tension and rarely lets up. Considering most of the film takes place in one room, he keeps the pace and atmosphere tight and very well structured. It’s worth noting that he has previously made some pretty solid horror movies including the recent Hush (2016), which also premiered on Netflix and the surprisingly good sequel to an inferior first film, Ouija: Origin of Evil (2016).

Performance wise, everyone here is very solid. Bruce Greenwood oozes sleaze as his role develops as Gerald. Carla Gugino puts in a very committed performance as Jessie, and makes us stick with her every step of the way. After playing so many supporting roles, it’s good to see her being able to show some raw talent in a lead role. In a smaller role, Henry Thomas is also very good as Jessie’s father who appears in flashbacks and will make you forget he was the little boy in E.T. (1982).

So if IT (2017) wetted your appetite for more horror, then it’s worth staying in for a night with some homemade popcorn and maybe a few drinks to calm the nerves, as Gerald’s Game is defiantly worth your Netflix subscription.

When Gerald says “all things serve the beam” this is a reference to Stephen King’s Dark Tower novel Series. 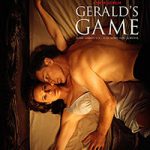