There’s no studio better than A24 to showcase how guns and child mobsters are one addictive, volatile cocktail in Ben Wheatley’s Free Fire.

It’s been nearly a year on this site since I first discussed Ben Wheatley; the upcoming filmmaker one could describe as the auteur’s rising doppelganger, with a filmography diverse both in style and quality as each iteration offers a gaping mouth-drool line over their inspirations. His most recent effort being last year’s High Rise – a high concept yet problematic tapestry to Kubrick made with creative partner-in-crime screenwriter Amy Jump. The pairing back to their grungy basics in Free Fire, a cool and groovy contained thriller I can safely say balances the original with the inspired, and wit that nearly gives Shane Black’s 70’s outing The Nice Guys a run for their almighty dollar.

At the centre of Free Fire is control, both in craft and context, Jump and Wheatley compressing their film into a nihilistic time-bomb where all morals rejected, the dialogue snappy and delivered in complete confidence, as each second of interplay and catch-22 burns closer and closer to unexpected, unrelenting chaos. The story follows Justine (Academy Award Winner Brie Larson), a criminal intermediary between The Provisional Irish Army and Boston Mobsters who are selling illegal arms. A situation in which humble egos and trust are surely at an all-time low, with each character genuinely not wanting to be there.

A common annoyance in action, particularly mobster flicks, is the immediate call to arms without any question. Instead of, say, wanting to de-escalate and perhaps maybe walk home okay with the prize, action films of this sort tend to feature not characters, but instead caricatures all too drunk on sociopathic workaholic Kool-Aid, playing the metagame of fighting without any regard for the big game of staying alive. Free Fire is not the same case. Jump and Wheatley treating their characters as conscious, anxious big babies in a muddled ‘eye for an eye, tooth for a tooth’ set of circumstances, which makes the narrative on its own merit a genuine thrill. Pair this with their execution and you just have a smorgasbord of violence and joy. Brie Larson for starters is every bit worth her Oscar, playing our collected, de facto voice of reason amidst truly volatile egos you can list off from the likes of Sharlto Copley, Armie Hammer, Cillian Murphy, Sing Street’s own Jack Reynor and Sam Riley, all of which are authentic to what they needed to be. Each member caught in the crosshairs as the battlefield, a warehouse-sized civil war, changes into confusion to great effect as you’re left waiting for the next bullet to find its unintended target.

The real star, however, comes in the form of sound editing; that beautiful thing screaming sweet gunshots and their piercing echoes into your ear and you’ll be willing to sit there and enjoy it, god damn it! With technical flair set-piece to set-piece guided by the spiritual hand of executive producer Martin Scorsese, and bombastic soundtrack from Ex Machina’s composers Geoff Barrow and Ben Salisbury, the film unravels into what I can only describe as organised chaos, echoing my fellow critics who say this did for guns what Mad Max: Fury Road did for cars. Cinematographer Laurie Rose doing wonders with so little, framing the action low, crouched, and above all clear among the chaos with every cut deliberate and careful to show it in all its glory.

It’s a film that commands to be seen in a packed cinema, in low lights and, unlike our characters, your aim dead centre, sure not to miss anything.

While planning out the dimensions of the set, Ben Wheatley built a scale replica of the film’s warehouse in the video game Minecraft. 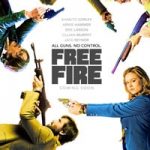