The film follows the story of Louvre director Jacques Jaujard (Louis-Do de Lencquesaing) and Nazi Occupation officer Count Franz Wolff-Metternich (Benjamin Utzerath), who are forced to work together in preserving the historical art found in the Louvre, while Paris was under Nazi occupation in World War 2.

The first thing you’ll notice about this film is its unconventional style. Director Aleksandr Sokurov has blended together archival footage, re-enactments, voice-over and artistic overlays and has combined them all in the editing room to tell a story about the world’s most famous art museum, the Louvre.

It’s a unique way to tell the story about the preservation of art that dates back hundreds, sometimes thousands of years, during a period in world history where war is all that was known. The combining of Nazi forces with those in charge at the Louvre was interesting to see – but more so the fact that the Nazi’s were such art lovers, and pulled no stops in keeping the Louvre safe during that time of war.

It really goes to show just how important art is in reference to world history and culture, that even the most evil of forces have respect for its significance. Sokurov’s film pays homage to that significance, with the film itself quite obviously being a labour-of-love for the director. Told mostly through the use of voice-over, with re-enactments from the film’s actors as well as appearances by historical figures like Napoleon, Francofonia is not the type of film that will appeal to all audiences.

There isn’t much in terms of entertainment value in this film, however anyone with a love for art will enjoy it, and for those that can appreciate unique filmmaking with excellent direction, and can handle a somewhat tedious subject matter will definitely find the good in this film and appreciate it for what it is.

During production, this film was often rumored to be shot in a single take, making it an ideal sequel to Aleksandr Sokurov’s previous ‘museum film’, Russian Ark (2002). Eventually, a more traditional editing technique was chosen by Sokurov to tell the story. 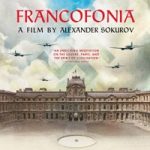