Not your average true-story drama, Michael Keaton gives such power to The Founder, reminding us that even multi-billion dollar companies can have a heart.

Maccas, the good ol’ golden arches, a fast food symbol that can be recognised in over 100 countries and feeds 1% of the world’s population every day. The Founder takes us back to 1954, to this restaurant’s humble beginnings and how a struggling salesman created an empire from a revolutionary idea.

The first scene introduces us to Ray Kroc (Michael Keaton) pitching a product right to the audience’s faces and even though his success is rare, Ray is a determined man who keeps pushing back for success. The remarkable work done by the art department completely envelops you in the fifties, down to every glass and spoon. When he discovers a strange diner called McDonald’s and experiences ‘speedy food’ for the first time, you can practically see the light bulb above his head and the dollar signs in his eyes. The McDonald brothers, Mac (John Carroll Lynch) and Dick (Nick Offerman) show the energetic salesman their tricks and techniques and it is a truly innovative and inspiring concept. The film has made the fast food process seem almost magical and it’s something that a lot of people take for granted in today’s world with Subways and servo’s on every street corner. Back then, this was completely new, to order your food and have it ready to eat in thirty seconds – Ray sees that magic and fights to franchise McDonald’s across America.

The actors’ performances are nothing short of incredible, but since The Founder takes place over a series of years, my only complaint is that the supporting cast don’t get more screen time. Ethel Fleming (Laura Dern) is the central character’s wife and with the limited moments Ray shares with her, you can see the strain on her face of continually supporting a man who has become lost in greed. The film’s big stand-out for me was Nick Offerman, in the role of Dick; a logic and numbers man who created the ‘speedy food’ system, he is both cautious and caring when Ray starts pushing harder for progress.

Brilliant direction by John Lee Hancock brings all the pieces together to share this challenging origin of an international institution. The camera angles that tense our nerves, the beautiful strings that give strength to the score that guides our emotions so carefully – it all just works, as seamless as a McDonald’s burger-making station.

After an exceptionally long day of filming and Micahel Keaton wanted to lift the spirits of the exhausted crew and rented 2 ice cream trucks to the set. 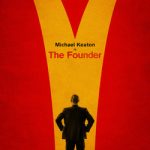