Flight Crew is a Russian disaster film that has you thinking you’ve seen this all before – until the final act, leaving you pleasantly satisfied in the end.

The seasoned pilot Leonid (Vladimir Mashkov) and his brash trainee Alex (Danila Kozlovsky) are on a passenger-less flight when they decide, mid-route, to detour and help save the lives of people stuck on an island at the epicentre of an earthquake. Once there, their courage is put to the test as they frantically try and evacuate the survivors, while a volcanic eruption looms over them, threatening their escape.

Flight Crew is the type of disaster film that you’re used to. The basic theme is there; the courageous heroes are compelled to save the lives of the innocent, while having to put their differences, ego’s and values aside to work together for the greater good, while death consistently knocks at the door. Whether the disaster involves an earthquake, volcano, flood, tsunami, or plane-crash etc., the common elements are there in most of these films. What usually separates the good ones from the bad is the characters, and how we connect with them, and how the action holds up; whether it’s truly intense or it’s just a spectacle for spectacle’s sake. Flight Crew gets one out of those two things right. While the characters and performances are lacking, the action is intense, and a spectacle at the same time. The cast all put in a commendable performance, but the characters are fairly clichéd. For instance, you have your stern, all-business veteran pilot in Leonid, your young, brave, trainee pilot that doesn’t play by the rules in Alex, and your token lead love interest in the form of pilot Alexandra (Agne Grudyte), who’s just trying to garner respect in a male-dominated career. It’s these archetypal characters that set the film back a notch, as it’s clear the actors are better than that.

The film has somewhat of a slow start, introducing the characters and so on, though once the action kicks in, all systems are go. Initially the disaster and action elements feel a bit derived, however the final act of the film features a tense, daring rescue that feels quite original, and it’s edge-of-your seat stuff. That final act makes up for any faults you may have had with the film leading up to that point, with the outcome being enjoyable overall.

Flight Crew doesn’t break any new ground in the disaster film genre, but it hits the mark as a pure genre-film, providing viewers an entertaining alternative for anyone tired of the same old American disaster movies.

Flight Crew was the number one film at the 2016 Russian Box Office and sits inside the top six for all-time money-earners.

Flight Crew will be screening at the 2016 Russian Resurrection Film Festival, for session times and tickets, please go here. 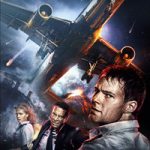