After 35 years of marriage, Sandra (Imelda Staunton) stumbles upon her husband Mike (John Sessions) in the cellar with their close friend Pam (Josie Lawrence) – Pam’s tacky red lipstick smeared across his face. And so it goes in the British comedy-drama from director Richard Loncraine, Finding Your Feet.

“It’s not what it looks like”, he yells. Funny. It looks an awful lot like he’s having an affair. It’s the eve of Mike’s retirement as police chief and they’re having a lavish party at their Surrey estate to celebrate his recent Knighthood. While discussing her new ‘Lady’ status, Sandra is excited to finally begin the life with her husband she’s been patiently planning for years. So you can imagine her devastation when she discovers that the affair has been going on right under her nose for five years.

With a lost sense of self and utterly heartbroken, Sandra runs to her sister Bif (Celia Imrie), who’s living in a small council flat in inner London. It’s here where the real story begins.

Ten years have passed since these two sisters last saw one another and those years have seen them move in very different directions. Sandra epitomises the upper class ‘kept’ woman. She’s rude, obnoxious, and thinks her needs are above all others. An unfortunate trait she’s passed on to her daughter Nicola (Marianne Oldham), who has a serious lack of compassion for her mother’s predicament. Bif (short for Elizabeth) on the other hand, is a free spirit who lives life to the fullest – albeit a little erratically. She has a contagious lust for life that sees her unapologetically going for the things she wants. The town and Bif’s home are a waiting room of sorts for Sandra in the beginning. But something in her shifts and she embarks on a journey of rediscovery as the film progresses. With a little help from Bif and her curious circle of friends no less. Bif convinces Sandra to join her weekly dance class. As it turns out, Sandra had aspired to be a dancer in her youth but gave it all up when she became pregnant. Her husband was more focused on keeping up with the Joneses than allowing his wife to have any real agency.

In a break from the norm, Timothy Spall plays Charlie – the pot-smoking spirited love interest. Then there’s Jackie, played by the ever-entertaining Joanna Lumley of Absolutely Fabulous (1992-2012) fame. Jackie’s been married five times and has all the wit and sarcasm in the world that comes with it. Much to audience’s disappointment, there are too few scenes between Sandra and Jackie. David Hayman rounds out the inner circle as the gentle Ted who is learning to live after loss.

The story arc builds toward the group’s trip to Rome where they are to perform a dance routine on stage. It’s a very unrealistic and underwhelming climax, but thank goodness Finding Your Feet has strengths elsewhere. Most notably in the lead characters. Each character beautifully represents a different facet of life as a 60-something. The challenges they face, although profoundly life-changing, don’t stop them from being open to new possibilities. Charlie, in particular, is caring for his wife as she heads into the advanced stage of Alzheimer’s. Still, every week he gets together with the team and busts out a little hokey pokey warm up with a spring in his step. There’s life in them yet.

Meg Leonard and Nick Moorcroft’s screenplay originally pandered heavily toward the comedic side. Loncraine, perhaps best known for My House in Umbria (2003), wisely leans more towards the drama in the finished product. A decision you’ll likely be grateful for as cheap laughs at the expense of old-timers is the only so-called comedy that makes the cut. The film does well in spite of these jokes because the authentic human drama cuts deep and resonates with audiences. Their life events could be on the cards for any one of us.

Finding Your Feet is slow to find its footing, but it’s far from the worst of its genre. The film is leaps and bounds above last year’s Hampstead (2017), which depicted a similar subject matter. The narrative takes a while to build up any genuine compassion for the characters, but it will get you there by the end – with a tear or two shed along the way.

Life’s complicated but don’t let that get in the way of living. That is the primary takeaway from Finding Your Feet. It is a poignant message wrapped up in a pleasantly entertaining package.

Timothy Spall and Imelda Staunton played husband and wife in The Love Punch (2013). 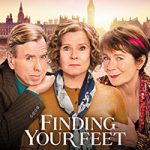