Filth follows the story of Scottish police officer Bruce Robertson (James McAvoy) and his attempt to sabotage his colleagues’ chances of making detective in order to advance his own position, all whilst battling his personal demons with a progressive onslaught of alcohol and drug abuse.

Robertson is an extremely dislikable character, one who stops at nothing to humiliate his fellow officers and friends to serve his own deluded purpose. His lies, schemes, threats and manipulations appear to be second nature to him. His alcohol and drug abuse eventually get the better of him and things begin to spiral out of control dramatically, although by the end of the film, we almost feel sympathy for the character – something that seems nearly impossible to achieve as the film progresses.

Director Jon S. Baird manages to craftily sway us towards that conclusion, by carefully keeping Robertson’s back story concealed and only suggestively reveals over the course of the film that deep down he may have a conscious and a good heart lurking somewhere.

James McAvoy gives us an expert portrayal of his character. He jumps out of his regular good-guy skin with relative ease and plays the villain quite well. His co-stars also offer very competent performances. Most notable of these, his tortured best friend Bladesey, played by Eddie Marsan and the young up-and-comer (but troubled) officer Ray Lennox, played by Jamie Bell. The whole cast in general, was cast perfectly.

Filth suffers when it comes to its wannabe Trainspotting narrative style. Even though the film is based on an Irvine Welsh (the writer of Trainspotting) novel, it may have been beneficial to offer a more original take on the material, rather then keeping in the same style as the other, more superior Welsh adaptation in Trainspotting. Filth offers a similar frantic pace, but sometimes misses the mark on intertwining it’s quasi-realistic world setting with its hallucinogenic one. It’s at times just uncomfortable to watch – however it’s likely that this was the filmmaker’s intention.

Filth successfully manages to force an emotional reaction out of the audience. Be it love or hate (or somewhere in between), the film will have an affect on you after the credits role. It is purely an adult film that throws morals out the window and as the title suggests, Filth delivers filth.

James McAvoy revealed in an interview that he would drink up to half a bottle of whiskey every night so that his character looked rough and hungover. 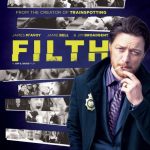