This Bob is an openly gay New Yorker who made a name for himself sticking up for the underdogs of the film industry: The experimental filmmakers, the average looking performers, the small budget flicks, the non-commercial blockbusters – anyone who dares not bow down to the status quo that Hollywood often enforces on our future directors.

Hawk is pretty much notorious in the business for being an oddball, giving oddballs the chances that big producers frequently deny them. This documentary introduces us to the man behind the popularisation of independent cinema, chronicling his childhood as a stuttering preacher’s son, his moderate rise to fame as an off-Broadway and off-off-Broadway director, his success as an award winning film producer (and apparently the first gay man to win an Oscar), and his involvement at major film festivals, searching for the next surprise masterpiece.

You’d think this would be a great documentary, judging by its unique subject matter. But sadly, it does not exceed expectations. Film Hawk is not all a good film. Bob’s story, though more-or-less interesting, does not make an investing feature film. He’s undoubtedly a great guy who deserves to receive long awaited recognition, however his story would have been better suited for a much shorter film, or an article in Reader’s Digest. There just isn’t enough material for the filmmakers to work with here, and the struggle to turn an uneventful biography into something unique certainly shows.

There are several recurring sequences throughout the film where they back-and-forth between colour footage and black-and-white footage, desperately trying to add in some quirkiness to the generally dry and awkward interviews, and dreary stock footage that make up the bulk of this film (and warning – those sequences will give you multiple headaches if you decide to watch this film).

Though there’s no denying that there’s good intentions behind the making of this documentary, Film Hawk is simply not worth the watch. I highly recommend giving it a miss. They should have made a piece about Australia’s Bob Hawke – that would have been a much better story to tell.

Film Hawk is screening as part of the 2017 Melbourne Documentary Film Festival, for tickets please visit the MDFF official website. 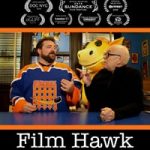