The Fantastic Four return to take on one of their biggest rivals in the Silver Surfer and his master, the planet destroying Galactus.

In this movie our four heroes are faced with a major task in discovering the purpose of the Silver Surfer’s visit to earth and ultimately the protection of the world. An event on an epic scale such as this should have been treated as such in this movie, but instead the film travels at a pace where the character development appears to  have been short-changed for special effects and petty family dilemmas from the Four.

They are also forced to team up with their arch-rival from the first movie, Dr.Doom (Julian McMahon) who has been revived and returned to help the Fantastic Four in their efforts to capture the surfer, and in true comic-book fashion he evidently turns against the Four after obtaining enough power to warrant his own evil plans.

The acting in this film is sub-standard and expected from a PG rated comic-book film adaptation. It is funny at times but overall the dialogue is dumbed down with some funny and some not so funny one-liners. The film does have feel-good themes that cover family, courage, friendship and sacrifice and the action keeps you entertained for the short 90 minute duration of the movie.

One plus for this movie is the effects sequences. The graphics are superbly designed and the Silver Surfer looks amazing. The action sequences will keep you on the seat of your edge but it is hard to get past the under-development of character of the Surfer who plays a major role in the film.

Overall, F42 is a short, entertaining and visually exciting film. However it lacks in story and character development which makes it just as good as its mediocre predecessor when it should have been better. In a year of super-blockbuster releases, F42 has not lived up to its other Marvel film counterparts such as Spider-Man and X-Men and appears to have just been pumped out of the Marvel production line for the sake of giving the original Fantastic Four film a sequel.

Jessica Alba, upon receiving criticism about her performance in this film, said that the director, Tim Story, told her “It looks too real. It looks too painful. Can you be prettier when you cry? Cry pretty, Jessica … Don’t do that thing with your face. Just make it flat. We can CGI the tears in”. 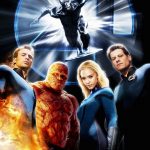 This movie was a disaster