Fantastic Beasts and Where to Find Them is mostly enjoyable with some great world building, but is marred by some weak villains and plot points.

Newt Scamander (Eddie Redmayne) is a wizard out of Hogwarts, who enjoys collecting magical creatures aka fantastic beasts in his spare time for research. He visits New York to further expand on said research and ends up embroiled in the rising tensions between the American wizarding world, and the no-maj’s (no-magic’s). After his creatures are accidentally set loose in the city, Scamander and his new friends Jacob Kowalski (Dan Fogler) and Porpentina Goldstein (Katherine Waterston) set out to recover them, while trying to discover the mystery source of a villainous, and dangerous magical presence in New York City.

Fantastic Beasts and Where to Find Them is set in the Harry Potter universe created by author J.K. Rowling, but is set about 70 years before Harry’s time. The film brings us right back into that world, featuring similar elements that made the Potter films so loved around the world. The quirky characters and humour is there, as is the magic, the look-and-feel, and the overall pacing of the film certainly feels like you’re watching a film found in that same universe. The story however, while still being a nice introduction into these new characters, does feel a bit generic – and one that was obviously designed to set up multiple future films.

Scamander’s search for his escaped beasts makes up one portion of the overall plot, while the mystery behind the evil force plaguing New York is another. It felt like the film could have benefited from more focus on one of those aspects and less on another, as having those overlapping plots did not do the film any favours. While there is plenty of character development, and we do get to meet many of the fantastic beasts, the film still felt like a mashup of many different fantasy blockbuster concepts; maybe one too many. The beasts themselves looked pretty good for the most part, but at times also looked extremely cartoonish, essentially pulling you out of the moment. It’s a shame because a film like this, with the powerhouse Potter franchise behind it, could have done better on the visual effects department. Still though, it wasn’t completely unsurprising, and in the bigger scope of the film, all the effects fit within a specific spectrum that the filmmakers were going for. It’s just hard to take it seriously when at times it felt like a live-action film mixed in with an animated one, or vice versa, rather than pulling out all the stops to blur that line a little more.

Redmayne delivers a commendable performance as Newt Scamander, and will do well moving forward with the future films. His character though, came across as a bit too awkward, to the point of being creepy rather than likeable. Dan Fogler as Jacob Kowalski steals the show in this one, as a human (no-maj) thrust into the wizarding world. His well-to-do attitude renders him extremely likeable and he serves as one of the film’s better comic reliefs. Katherine Waterston and Alison Sudol (who plays Porpentina’s sister) are both great in their roles, and Colin Farrell does well as the brooding wizard Percival Graves, but had the potential to be more, as his character was fairly typical. Ezra Miller’s mysterious character Credence probably had the most range to work with and he nails his performance.

Overall, Fantastic Beasts and Where to Find Them is a solid entry as the first film of a series, but suffers from an underwhelming villain and some plot points that seemed to serve little purpose to the overall story. It tries hard to appeal to both adults and children, and there are things in it for both demographics, even if they’re a bit unbalanced. The characters, humour and pacing of the film give it a big boost on the entertainment value front, making for a good night out for all fantasy/Harry Potter film fans of all ages.

J.K. Rowling has stated that this film “is neither a prequel nor a sequel to the Harry Potter series, but an extension of the wizarding world. Newt’s story will start in New York, seventy years before Harry gets underway” 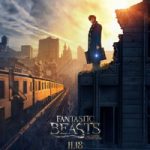